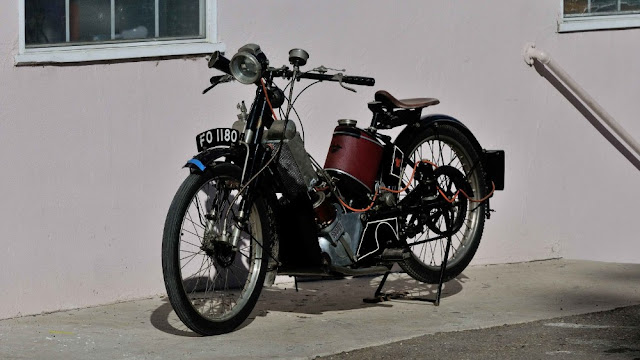 Scott may not be the most famous manufacturer in motorcycling history – but it certainly has its place. As, indeed, does Scott\’s most celebrated bike, the Squirrel. The British marque won the Senior TT – in both 1912 and \’13. And the Scott trial – which began in \’14 – and became a bastion of off-road motorsport – was named after the Yorkshire firm. Founded in \’08, Scott went on to produce finely-crafted motorbikes for decades to come.

Engineering excellence – forged in competition\’s crucible – flowed down into Scott roadsters. The Squirrel was the prime beneficiary. Squirrels came in several flavours. There were Super Squirrels, Sports Squirrels and Flying Squirrels. All came with a 596cc motor – mated to a 3-speed hand-change \’box. Squirrels handled well, looked and sounded good – and merrily skipped up to 70mph. In the Twenties, that was quick!

Squirrels were apt to be temperamental, though. Mechanically, they played up a bit, from time to time. And – with their hefty price-tags – that did not go down well with owners. As the model aged – and its cutting edge blunted – sales declined. To this day, though, there is many a motorcyclist who is nuts about Squirrels. With luck – over the years – a few of them were horded away. So, you never know … Scott Squirrels may again be a common sight, on the highways and byways of Britain.