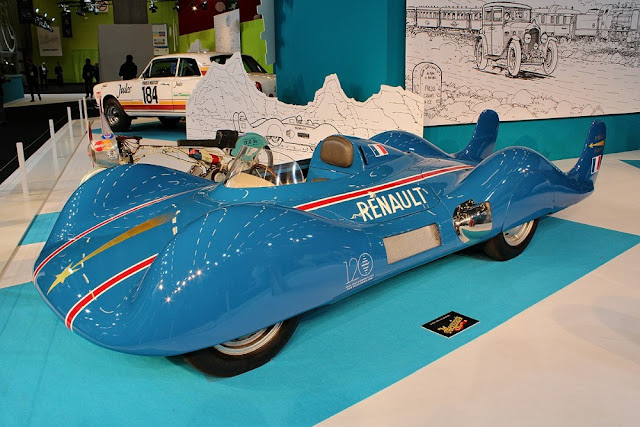 You might not think there would be much to connect the Renault Dauphine runabout – and a land speed record car! The Renault Etoile Filante\’s LSR attempt, however, was, in part, to publicise the new roadster. To that end, Renault recruited race car designer Albert Lory. He was tasked with taking the Etoile Filante from project to projectile. Into his design, Lory duly incorporated a space-frame chassis, plastic bodywork, massive disc brakes and torsion bar suspension.

Power for the Etoile Filante\’s record attempt came courtesy of Turboméca. The French aero-engine manufacturer supplied the car\’s gas turbine motor. The device was dubbed the Turmo 1. It was a thirsty piece of kit. Three fuel tanks were required to supply it! One of them – fabricated from synthetic rubber – was in the car\’s nose. Placed fractionally fore of the cockpit, it would not have pleased \’Health & Safety\’ much! The plucky pilot was Jean Hebert. He drove the Etoile Filante to 191.2mph. That was sufficient to topple Rover\’s turbine-powered tally. A new record had been set!

The Etoile Filante was another example of the sci-fi mania sweeping the Fifties. In the US, especially, anything which smacked of spacecraft was a surefire hit! The Etoile Filante – or, \’Shooting Star\’ – fit the bill perfectly. Its record-breaking run took place at the Bonneville Salt Flats, Utah. There could be no doubt Renault had pushed the boat out, technically. More than a mere marketing stunt, the Etoile Filante provided invaluable lesons for real-world cars, for years to come. Straight-line stuff it may have been, but there was still much for Renault to learn. Acceleration, road-holding and braking data from the Etoile Filante fed into future Renault models. After all, there is no surer test of a car\’s stability, than a stab at a world land speed record! The Etoile Filante made 270bhp – all of which had to be efficiently transmitted to the salt. Clearly, Renault\’s planning passed muster – as its successful run showed. The Renault Etoile Filante, then, was a fine example of French forward thinking … in every sense of the phrase!