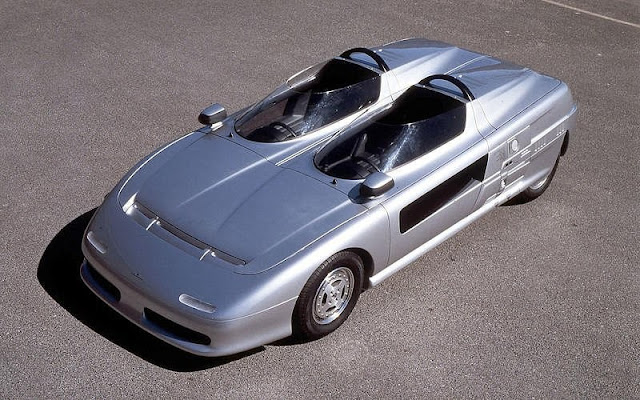 The Italdesign Aztec came with dual cockpits. A 2-seater, driver and passenger were ensconced in separate \’compartments\’. It was a concept car, after all! The Aztec was made to commemorate Italdesign\’s twentieth anniversary. Its designers never envisaged it on the open road. A group of maverick Japanese businessmen, however, had other ideas!

Giorgetto Giugiaro was chief stylist for the Aztec. As a rule, his work was far from flamboyant. Indeed, he had penned many a family runabout. Who knows – maybe it was just time for him to let his creative hair down. At any rate, Giugiaro was immensely proud of the Aztec. And – certainly, from a visual point of view – it was nothing, if not striking. Slick and sophisticated – and with a silvery sheen – showgoers\’ eyes were riveted. The Aztec\’s rear end was seriously high-tech. Wrapped around the wheel arches were \’service centre\’ panels. They housed a raft of gizmos and gadgets. There were coded door locks, built-in hydraulic jack controls and engine fluid monitors – just for starters. Somewhat more down-to-earth features included a torch and fire extinguisher. Not forgetting a petrol cap! The Aztec\’s interior was equally cutting edge. Communication between the two cockpits, for example, was via electronic headsets!

The Aztec\’s engine was a 5-cylinder Audi unit – turbo-charged and transversely mounted. Transmission was Quattro 4-wheel drive. A dual-canopy body allowed easy access to the bay. The Aztec was unveiled in \’88 – at the Turin Motor Show. Among the enraptured onlookers were the aforementioned suits. They were sure there might be a market for the car back in Japan. With the rights to the Aztec safely in their pockets, they set about putting it into production. 50 replicas of the prototype were due to be built – though less than half that number would roll off the line. The bodies were made in Italy. They were then shipped to Germany. There, they were entrusted to engine tuners Mayer MTM – who installed the Audi powerplants. Finally, they arrived in Japan. When transportation costs had been factored in, the Aztec retailed at the yen equivalent of $225,000. That was a lot of money. Each car, though, came with an added extra. Giorgetto Giugiaro signed every Italdesign Aztec personally. He was indeed proud of his outré creation!