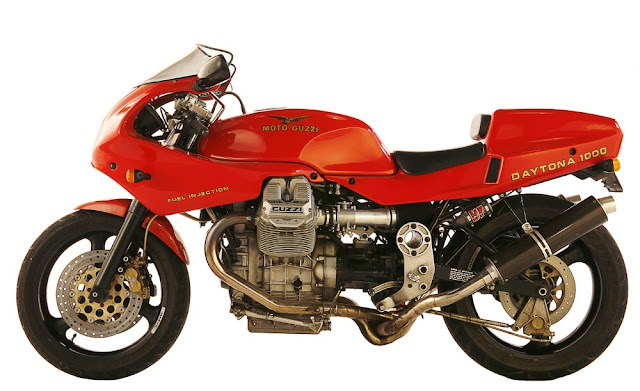 It is probably not a bad marketing plan to name a bike after an iconic American circuit. It is one fraught with danger, however. Turn out a machine which does not do justice to that arena … and you will look a tad daft! No such worries, though, for Moto Guzzi. When the Daytona 1000 was launched – in \’92 – its moniker was nothing if not apt. After all, the Daytona was designed by \’Dr John\’ Wittner. He was an ex-racer/engineer. Indeed – back in the day – he had jacked in dentistry, to go to Guzzi. Not surprising, really. To fans of the brand, Guzzi\’s Mandello HQ was near-mythical. Dr John successfully campaigned Guzzis in the late \’80s. Now, he sought to cement that legacy – in the shape of a road-going superbike.

The Daytona was directly descended from track-based exploits. It was a gimme, then, that it handled beautifully. Of course, the Daytona engine was suitably detuned. That said, it was still fitted with fuel injection – via its four valves per cylinder. 95bhp was duly on tap – equating to a top speed of 150mph. In tandem with that, the V-twin\’s torque curve was typically steep.

When it comes to motorcycles, Moto Guzzi have honed many a two-wheeled gem over the years. The Daytona 1000 was just the latest in a long line of dependable, attractive products, from the Italian stalwart. In the Daytona 1000, Dr John had dished up a mouth-watering superbike. The ex-dentist\’s two-wheeled delights would be savoured by bikers for years to come. Many a radiant smile resulted!