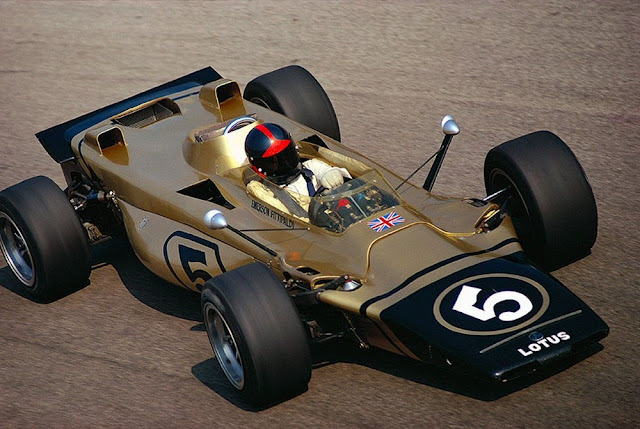 The 56B was another example of Lotus pushing motor racing\’s technical envelope. Saying that, boss Colin Chapman knew no other way. Powered by a turbine engine, it was a new first for F1. Said motor was supplied by Pratt and Whitney. The car had its genesis in Indianapolis, America. Lotus had entered the STP-Paxton turbo car in the \’67 Indy 500. It performed well. Driver Parnelli Jones would have won the iconic race – had he not broken down, just yards from the flag. Nothing daunted, Chapman returned to Indy in \’68. With backing from STP\’s Andy Granatelli, Chapman hired Maurice Phillipe to design the Lotus 56. Sadly, Chapman was to experience an unpleasant case of déja vu. Pilot Joe Leonard again broke down, with victory as good as in the bag.

Shortly after Lotus\’ streak of bad luck, American motorsport banned turbine-powered cars. Chapman decided it was time for F1. Sticking with the turbine power the 56 had pioneered, the 56B was readied for the \’71 season. Lotus had intended to unveil the new car the previous year. Tragically, the death of driver Jochen Rindt – at Monza – upset the 56B\’s development schedule. In due course, however, it rolled onto the grid at Brands Hatch – for the Race of Champions. Emerson Fittipaldi was at the wheel. It did not go well. The 56B bottomed out so much, the suspension snapped. Subsequently, it crashed out at Oulton Park. Next stop Silverstone – and the International Trophy. The 56B started on the front row. In the first heat, the suspension again gave up the ghost. Second time out, though, Fittipaldi finished third. Things were finally looking up, it seemed!

Thankfully, these early outings were non-World Championship events. F1 \’friendlies\’, so to speak. The 56B\’s first race that mattered was the \’71 Dutch GP. Driver Dave Walker started from the back of the grid – on a wet track. By the fifth lap he was up to tenth – notwithstanding turbine throttle lag. Sadly, it was not to last. Walker slid off the track – at the Tarzan hairpin. Next, to Monza – a year on from Rindt\’s fatal accident. The 56B placed eighth. At Hockenheim – albeit in another non-championship race – Fittipaldi finished second. And that was pretty much it for the Lotus 56B. In truth, its points tally was unremarkable. What fascinates aficionados, though, is that it was the first of F1\’s fabled \’turbo cars\’!