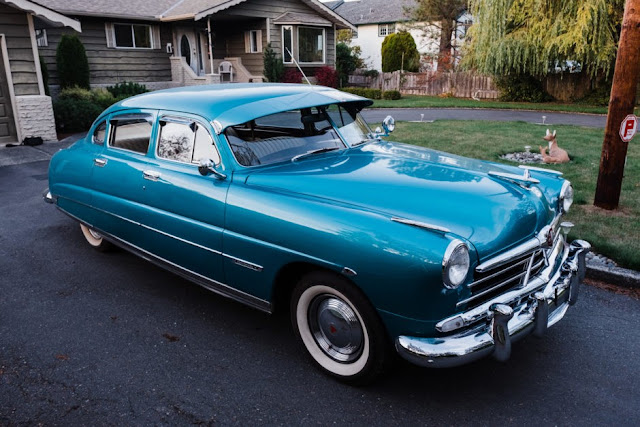 Founded in 1909, Hudson was a middling motor car manufacturer. Up until \’48, that is. Which is when their Step Down models were launched. Overnight, Hudson became a byword for \’cool\’. Even the bottom-of-the-range Pacemaker was sought-after. The Commodore was coveted!

Hudson\’s design department had worked overtime. Either that, or something had suddenly clicked. The curves of the Commodore\’s bodywork revealed a new set of shapes. They would dominate car styling through the Fifties. In particular, the Commodore\’s \’low-rider\’ profile was ahead of the game. It was enabled by Monobilt – a unitary-construction process Hudson had developed. The Commodore\’s floor-pan was beneath the chassis. So, occupants literally \’stepped down\’ into the cabin. But, Monobilt was more than merely pleasing on the eye. It was safer, too. Passengers were surrounded – and, indeed, protected – by a robust perimeter frame.

As 6-seater saloon cars go, the Commodore was pretty quick. The 8-cylinder engine version produced 128bhp. That made it good for 93mph. Half a million Commodores were duly sold. But – sadly for small car companies – the automotive sharks were circling. Firms like Hudson were small fry, compared to the bigger fish in Detroit\’s pool. With Ford, GM and Chrysler as rivals, it had always been on the back foot. In \’54, Hudson bowed to the inevitable and merged with Nash – simply to stay afloat. By then, though, it had had its day in the sun. Hudson\’s Step Down cars – most notably, the Commodore – were stylish, functional, fast and safe. What was not to like?