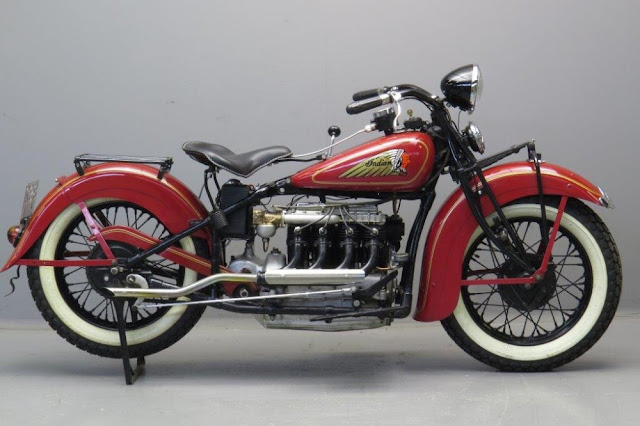 The Indian story started in 1901 – in Springfield, Massachusetts, USA. It continued until \’42 – and the outbreak of the Second World War. Originally called Hendee, the Indian Motocycle Company came into being in \’23. And, no, that is not a typo! One of Indian\’s most iconic machines was the succinctly-named Four. As the name suggests, its engine sported four cylinders. They were arranged in a longitudinal inline-four configuration.

Top speed for the Four was 90mph. Pretty quick, in the early Forties. The Four\’s side-valve set-up – 2 per cylinder – gave 40bhp, at 5,000rpm. The longitudinal layout meant overheating could be an issue, though. Cooling air struggled to find its way to the rear pots.

The Four looked every inch the classic American motorcycle. The fenders\’ rakish lines were pure Indian. Certainly, the bike had nailed down the \’laid-back\’ custom look. Styling-wise, the solo saddle, front forks and straight exhaust perfectly complemented the downward diagonal of the top frame rail. Comparisons cannot help but be made with arch-rival Harley-Davidson. But – complete with its in-line motor – the Indian Four was every bit as glamorous as a motorbike from Milwaukee. V-twin fans may conceivably disagree, of course!