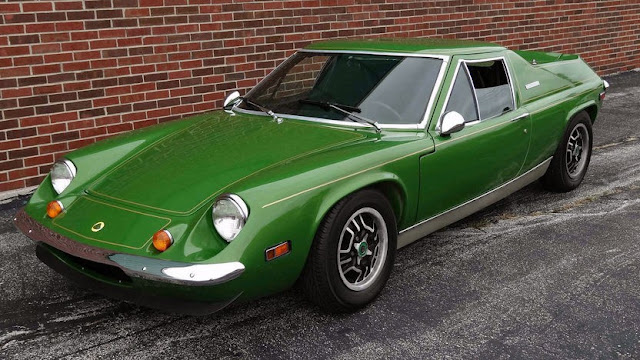 For all its power, the Lotus Europa was a sports car – not an F1 car! Yet – at least, up to a point – that was its raison d\’être. Colin Chapman – head man at Lotus – wanted a roadster that handled like a racer. At any rate, he sought to simulate the mid-engined layout – now de rigueur in F1. Certainly, at just 42″ tall – and with a drag coefficient of only 0.29 – the Europa\’s aerodynamic credentials were never in doubt.

The new car started out as the Lotus Europe. Trademark problems led to it being re-named the Europa. Handling-wise, the car was everything Chapman had hoped for. Road-test reviews were upbeat – at least as far as cornering was concerned. Steering was light – and the Europa perfectly poised. Key to the stability was rear suspension. It was comprised of lower wishbones and transverse top links. The Europa\’s laid-back driving position made sweeping through bends a breeze. Brakes were suitably solid.

But, the Europa was not without flaws. Creature comforts were in short supply. And, with a heavy clutch – and jarring ride – the Europa was far from user-friendly. Side-window gremlins did not help. Rear vision – or lack of it – was not exactly a selling-point. To be fair, Lotus did address the issues. The Europa was given a mini-makeover. Built in Hethel, Norfolk, the car stayed in production until \’75. Almost 10,000 Europas were built – in a nine-year run. Its goal, then, was to bring F1-style handling to the roads of the UK. And – while that was, for a sports car, an impossible dream – it came as close to living it as any!