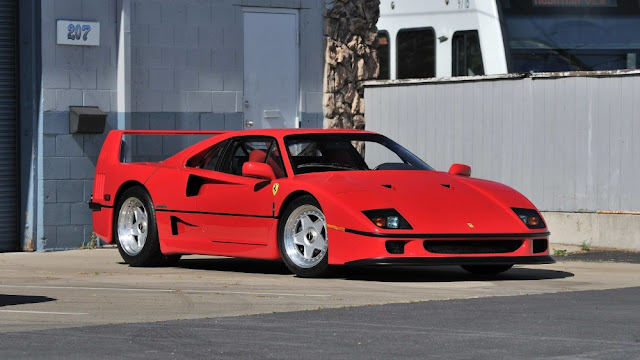 The F40\’s name referenced forty years of the Ferrari marque. It was boss Enzo Ferrari\’s brainchild … but, even he had to get board approval! Once given, the project was passed to Pininfarina. The doyen of Italian design agencies had a longstanding relationship with Ferrari. Just a year passed for the F40 to go from concept to production. It helped that it was based on the Ferrari 288 GTO. Theoretically, then, the F40 was a roadster. Practically, though, it required little modification to go racing. In large part, that was down to its weight – or lack of it. For a car that cost $275,000, there was a notable lack of luxury. Indeed, the cabin verged on the spartan!

The F40\’s low weight was down to its bodywork. Composite materials had been used to fashion it. They were 20% lighter than their metallic counterparts would have been. That – and minimal interior décor – meant the F40 weighed in at just 2,425lb. Add a 288 GTO V8 engine – and the result was explosive! The 3-litre twin-turbocharged set-up was fitted with sequential ignition and fuel injection. There were silver/cadmium con-rod bushes and nicasil-coated liners. Grand total – 478bhp. \’Competition mode\’ threw in a further 200bhp, if needed.

The F40 topped out at 201mph. 0-60 arrived in 3.9s. On its \’87 launch, it was the fastest road-going Ferrari yet. It stayed in production until \’92. Even the standard version featured a raft of competition parts. It had Group C brakes, 3-piece wheels and removable rear bodywork. Oh, and soft fuel cells. The racing pedigree of the Ferrari F40 was clear to see!