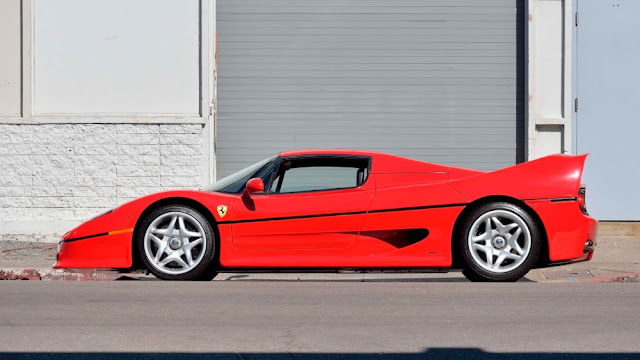 How to top the Ferrari F40? Well, with the F50, of course! While the former was focused solely on speed, the new car offered more by way of creature comfort. Even so, the F50 was far from luxurious – given that it was a supercar, retailing at £330,000. There were leather seats, though, for starters – of course, cast from carbon-fibre. And, the front suspension spring/damper set-up was transverse – allowing extra leg-room. The F50\’s ride was smooth, considering its performance stats. They were upped by a \’firm\’ computerised damping system. A V12 engine – and 6-speed gearbox – gave up tractable power. Precise steering was provided by titanium uprights, magnesium wheels and all-metal ball joints.

So, with a top speed of 202mph – and lightning-quick reflexes – the F50 was, effectively, a road/race hybrid. Its 5-litre motor made 521bhp. The 5-valves-per-cylinder V12 had its roots in F1 – in 1990\’s Ferrari 641/2. Saying that, peak revs for the road car were 8,500rpm. Rather less than the 14,000 for the GP car! Still – with chain-drive spinning its quad overhead camshafts – the sound from the roadster was still pretty ear-splitting! By contrast, the F1 car\’s engine used gears.

The Ferrari F50, then, was technically awesome. Naturally, it needed styling to match. Up to the plate stepped Pininfarina. The esteemed Italian design house unveiled a feast of tastefully-placed lines. Ducting was particularly delicious. Cowled projector headlights lit up the front-end. Inside, the LCD instrument panel was straight out of F1. A \’black box\’ flight recorder was included! Track days beckoned – brakes and suspension both being race-derived. 349 Ferrari F50s were built. All they needed was a road with enough scope!