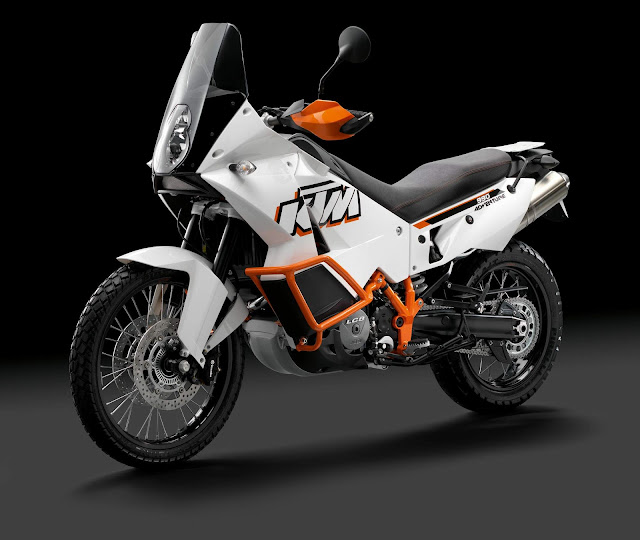 The KTM Adventure 990 was made in Austria. Produced between 2006-13, it was designed to be dual-purpose. The Adventure was equally at home both on and off road. At least, that is what the marketing men said! Its engine – the LC8 liquid-cooled 4-stroke 75° V-twin – was tailor-made for rough terrain. Power output was 105bhp. Capacity was 999cc – to be precise. With a dry weight of 461lb, the Adventure maxed out at 123mph – on flat tarmac!

R & D for the Adventure was the Paris-Dakar Rally. Lessons learned from that hotbed of competition trickled down to the roadster. Probably not too much pre-release testing was needed after that! The Adventure\’s long-travel suspension came courtesy of Dutch masters WP. The flexible tubular steel frame was almost identical to that on the 950 desert racer. So, indeed, were many other parts. Fabrizio Meoni sat tall in the saddle. He won two of the three Paris-Dakars preceding the Adventure\’s release. Not a bad sales pitch!

Styling-wise, the Adventure was supermodel svelte. But, a model that packed a punch! At 6,750 rpm, no less than 100 N-m of torque was on tap. And – thanks to its chromium-molybdenum trellis frame – the Adventure rolled with the punches, too. Anything that less than snooker-table smooth green lanes could throw at it, anyway! As far as all-round capabilities go, then, the KTM Adventure 990 was about as kitted-out as a motorbike gets!