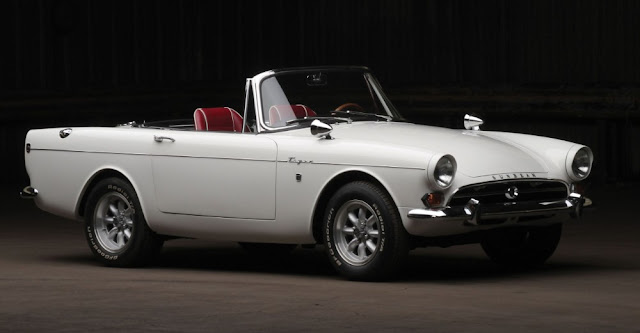 The Sunbeam Tiger was an Anglo-American hybrid. Built in West Bromwich, England, its roots were in Detroit, Michigan. Aptly, then, Rootes was Sunbeam\’s parent company! At least, until Chrysler took it over. In essence, the Sunbeam Tiger was a Sunbeam Alpine – but with a Ford V8 fitted. Carroll Shelby – he of AC Cobra fame – did early development work on the Tiger. Shelby then passed it to Rootes. The car\’s 4.2-litre engine was hooked up to a \’top loader\’ 4-speed gearbox. In turn, a more substantial final drive was installed. The body shell, too, was beefed up. But – with so much on its plate – Rootes was over-stretched. It still had the Sunbeam Alpine in production, too. Riding to Rootes\’ rescue came Jensen. Their premises were but a stone\’s throw away from Rootes\’ factory gates. It fell to Jensen to finish the Tiger project.

Power output for the Tiger was 164bhp. Top speed stood at 117mph. 0-60 came up in 9.5s. Torque – from the Ford V8 – was plentiful, to say the least. Care, though, was required in transferring it to the tarmac. Both steering and suspension were \’suspect\’. But – all in all – the Tiger was good value for money. Americans bought it in their droves. British buyers did the same. However, they had to wait a year longer.

So, it was looking good for the Sunbeam Tiger. Until Chrysler\’s buy-out of Rootes! Chrysler\’s top brass took an immediate dislike to the car – mainly, on account of its V8 motor. It was, after all, made by Ford! Which would have been fine – had Chrysler had their own V8. Actually, they did. Unfortunately, it did not fit! Sadly, that was the writing on the Tiger\’s wall. But, all was not lost! Rootes had already built 571 MkII Tigers – complete with 4.7-litre Mustang motors. The Sunbeam Tiger was set to stroll into a few more sunsets yet!