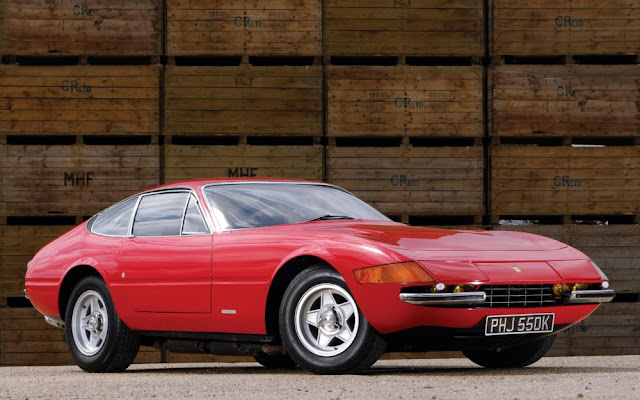 The Ferrari Daytona was launched in \’68. Those in attendance were probably expecting a mid-engined equivalent of the Lamborghini Miura. If so, they were wrong. The Daytona on display that day was a front-engined GT car. Designed by Pininfarina, it was in the traditional sports car mould. A multi-tube frame, for example, supported a steel shell.

Despite its relative orthodoxy, the Daytona was still the fastest road car on the planet. Flat out, it was good for 174mph. Its V12 motor meted out 352bhp – via a manual 5-speed \’box. Capacity was 4,390cc. Dampening down performance was weight. The Daytona had a lot of it to lug about. 3,530lb, in all. Saying that, the weight was at least evenly distributed. Rearward positioning of the gearbox/trans-axle unit helped counterbalance the frontal mass of the engine. Wishbone and coil suspension – on a firm anti-roll setting – provided plenty of traction. A tad difficult around town, the more the Daytona was given its head, the better-behaved it became. Steering lightened up nicely. Road-holding grew increasingly precise.

For a car of its class, the Daytona\’s interior décor was far from lavish. Electric windows, contoured leather seats and air conditioning, though, did come as standard. Only 1,426 Daytonas were built. Overall, however, it was a success in the showrooms. Of course, the car was christened after the legendary American race-track. Ferrari had picked up many a win at The Daytona Raceway, over the years. So, it was a fitting name for what would become one of the most celebrated of Ferrari sports cars.