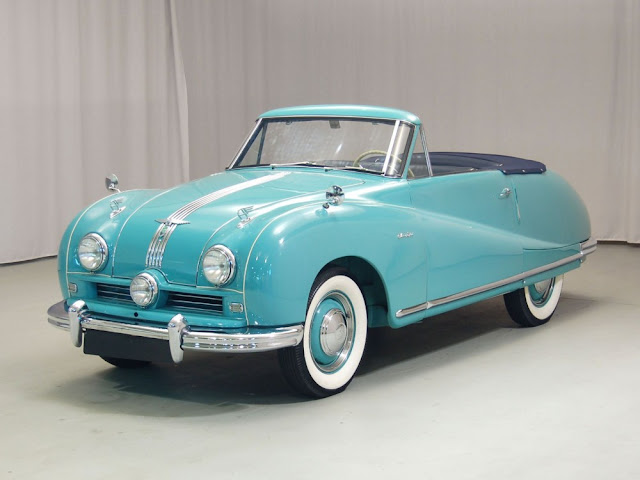 If ever there was a car which straddled a divide, it was the Austin A90 Atlantic. The clue was in the name! Both Austin and Pontiac emblems adorned the A90\’s bonnet/hood. Another clue! Built in Longbridge, England, it was one of the cars which blazed a trail out of the post-Second World War slump. The Atlantic was the first British car built primarily for the American market. In hindsight, its trans-oceanic mission was doomed from the outset. Stateside, they were used to 6- and 8-cylinder engines. So, the A90\’s 4-pot tally simply did not cut the mustard. The writing was on the wall when an Atlantic broke 63 stock-car records, at Indianapolis – in a week. Sales still did not pick up. Sadly, this was a case in which the American Dream just was not going to come true!

As the Atlantic\’s foray into stock-car racing had proved, it did not lack for performance. Indeed, the A90 was one of few post-war cars capable of 90mph. It was practical, too. When the A90 was launched – in \’48 – petrol was still being rationed. So, the Atlantic\’s frugal fuel consumption – 25mpg – was a valuable commodity. Its in-line four motor made 88bhp. Hence, the car\’s code-name – when rounded up to 90. Peak power kicked in at 4,000rpm. Top torque – 140lb/ft – arrived at 2,500rpm. Four speeds could be selected on the American-style steering-column gearshift.

7,981 Atlantics were built. Of those, a mere 350 made it to America. The A90 had taken the \’48 Earls Court Motor Show by storm. Austin must have been sure they had backed a winner. Especially, since the convertible model came with all mod cons. As well as the power-hood and -windows, the A90 boasted an Ecko radio, adjustable steering-wheel and heater. As early as \’51, though, it was the end of the road for the convertible. The saloon followed suit in \’52. And that was it for the Atlantic. For all of the \’special relationship\’, there are some things the UK and US do differently. The Austin A90 Atlantic was, in many ways, an admirable British automobile. But – to crack the States – four cylinders were just never going to be enough!