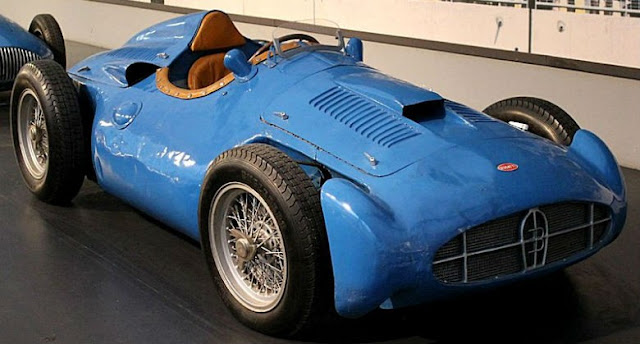 The Bugatti T251 was designed by Gioacchino Colombo. He had formerly worked for Ferrari. Fifties F1 cars were front-engined. Or, they were until Columbo came along. His T251 broke with that tradition. Its straight-eight engine was placed behind the driver. The 5-speed Porsche gearbox – and final drive – were unitary with the motor. That allowed for weight distribution ahead of its time. It all sat in a tubular space-frame chassis. Which was, in turn, hitched up to deDion axles. The fuel tanks flanked the driver. Another harbinger of F1 things to come.

The catalyst for the T251 was Jacques Bolore. He had recently married into the Bugatti family. It was not long before Bolore was influencing the way Bugatti was run. Since founder Ettore Bugatti\’s death – in \’47 – the firm had put racing on hold. Bolore, though, had visions of Bugatti back in F1. Enter the T251! It was unveiled in late \’55 – at an airfield, close to Bugatti\’s Molsheim base. It was there, too, that the car was first put through its paces – though not until March of the following year. Tester was Maurice Trintignant. The T251 was duly entered for the French GP, at Reims. Not, however, without qualms. T251 testing had revealed flaws. Designer Columbo – and driver Trintignant – maintained that more development was needed. But, Bolore\’s mind was made up. He wanted to go racing. And – in terms of executive clout – Bolore was now in Bugatti\’s driving seat.

Two 251s were taken to Reims. As the race got underway, the cars\’ avant-garde layout seemed on the money. Traction was noticeably improved – especially out of slower corners. High-speed handling, on the other hand, was hairy. The 251 had qualified 18th out of 20 starters. Ironically, it was to retire after only 18 laps. The pretext Bugatti gave was that the throttle was sticking. But, it was clear – to anyone with eyes to see – that the T251 was way off the pace. And – with Bugatti\’s coffers depleted – there was no more money for development, anyway. All a bit of an anti-climax, then – as far as Bugatti\’s return to top-flight racing was concerned. Sadly, Jacques Bolore\’s beloved T251 project turned into something of a damp squib!