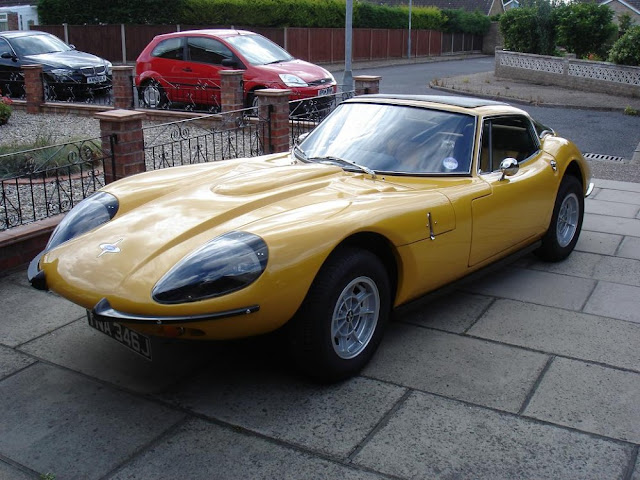 As much as any manufacturer, Marcos encapsulated English eccentricity. That was amply demonstrated by a succession of GT cars. \’Marcos\’ was an amalgam of the names of the two founders – Jem Marsh and Frank Costin. The new firm\’s first product was a sports car – built mainly from wood. The race version was a stellar success. Jackie Stewart launched his career in one. Which possibly points to where Stewart first got a taste for \’health and safety\’ within the sport! From that ornate creation emerged the classic Marcos sports car. It was to see several shape shifts over the years. The formative lines were drawn by Dennis and Peter Adams. Unveiled in \’64, the Marcos wowed London\’s Earls Court Racing Car Show. This time, the bodywork was fashioned from glass fibre – cutting edge, then, in every sense. Its chassis, though, still stood by wood. Suspension-wise, that first Marcos was fitted with Triumph wishbones at the front – and de Dion and Triumph arms at the rear. A Ford live-axle set-up followed in due course. Over time, Ford, Volvo and Triumph engines would be installed. So, it was already apparent that Marcos did not do \’predictable\’!

Marcos and motor racing go way back. In \’66, a \’Mini-Marcos\’ hybrid was the sole British entry to complete that year\’s Le Mans 24-hour race. Equipped with its Mini motor, the Marcos car was cheap to campaign. Incredibly, one could still be sourced new right up to \’94. Two of Marcos\’ Le Mans cars were aptly code-named the LM500 and LM600. Launched in \’94, they marked Marcos\’ return to the famous French circuit.

The Seventies got off to a good start for Marcos. The mythical Mantis was released. As the decade wore on, though, the firm was much less visible. Indeed, it fell to Jem Marsh to keep the servicing and parts departments open. \’81, though, saw a Marcos resurgence. Power was supplied by Ford. With not a lot happening on the sports car scene at the time, Marcos\’ revival was a shot in the arm not just for the marque, but the industry. 1983\’s Marcos Mantula – powered by a Rover V8 – was a hit in the showrooms. Yet more plaudits followed two years later – with the arrival of the Spyder. Marcos moved into the \’90s with the Mantara – which saw a styling revamp. The Adams brothers\’ original curves were still there – but suitably updated. \’97 saw a new model Mantis. Thanks to its Ford V8 engine, the Mantis GT thundered around race-tracks at more than 170mph. While Marcos may have been \’different\’, those in the know have never taken the marque less than seriously. Certainly, many an eyebrow has been raised by a Marcos GT car over the years. Though one cannot help but suspect that was always part of the Marsh/Costin game-plan!