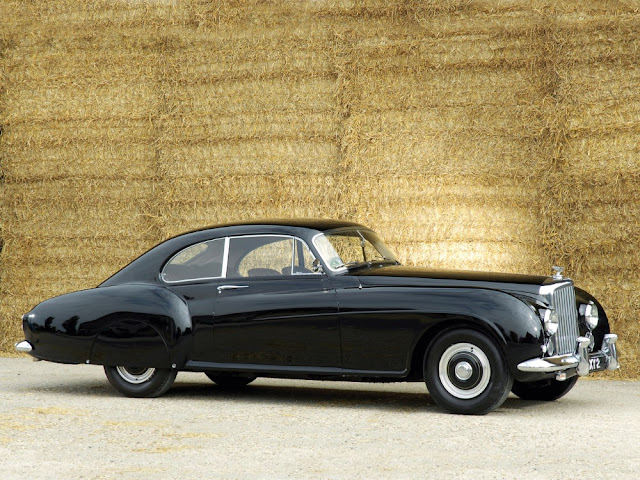 The Bentley Continental R was always going to be beautiful. It was, after all, coachbuilt by HJ Mulliner – out of their London HQ. But, there was more! It also had a top speed of 124mph – which made it the fastest 4-seater in the world, at the time. Mind you, that was a combination few could afford – in what was still, technically, post-war Britain. The Continental R was strictly for business magnates and movie stars – oh, and possibly, royalty! High levels of comfort came as standard. In a nutshell – in the early Fifties – the Continental R was the best car money could buy.

The Continental R\’s stately lines were refined in the Rolls-Royce wind tunnel – at Hucknall, England. John Blatchley – stylist extraordinaire – oversaw the operation. Combined with Mulliner\’s alloy body – and a one-off Supersports chassis – the result was a cutting edge British coupé. Gearing was raised from that of the Bentley R – the Continental\’s less sophisticated predecessor. That meant long-legged power throughout the rev range. The straight six motor\’s compression ratio was upped. A big-bore exhaust system was installed. As a result, the Continental\’s deep-breathing 4,566cc engine made light work of country roads. Notwithstanding the car\’s gargantuan size, aluminium bumpers – and alloy-framed bucket seats – helped keep the weight down.

In austerity-ravaged \’50s Britain, then, \’Continental\’ must have conjured up an exotic vision. Filled with cars like the R, sweeping through idyllic villages and rolling landscapes. Certainly, the interior came fully-furnished for far-flung travels. The wide wooden dashboard housed a rev counter and oil temperature gauge. Such items had been deemed surplus to requirements for the saloon version. Only 208 Continentals were built. So, the Bentley Continental R was exclusive, to say the least. It was, however, at the top of its game in virtually every department!