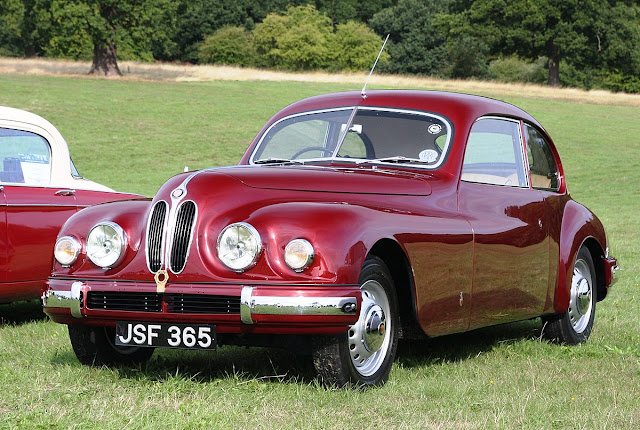 The Bristol 401 showed off the Aerodyne body shell. It was the work of Italian design house Touring. As its name suggested, aerodynamics were the name of the game. The 401\’s Aerodyne lines – and \’teardrop\’ tail – flowed through air with minimal resistance. Indeed – years after its production run ended – there were few cars that could match the 401\’s aerodynamic package. Aptly, then, the car was developed at an airport. Specifically, along the two-mile stretch of the Filton runway – in Bristol, England. Tests measured it travelling at a tad shy of 100mph – powered by a two-litre, 85bhp engine. Not much to play with, given that the 401 was a four-seater saloon car – with plenty of interior trim. Clearly, aerodynamics were playing a pivotal part in that 100mph top speed stat. Saying that, it was no ordinary motor it was using. Bristol had \’borrowed\’ the engine from BMW – as part of Germany\’s First World War reparations. As far as the 401\’s \’slipperiness\’ went, low wind noise – and 25mpg fuel economy – were more than welcome by-products.

With regard to the 401\’s shape, the same degree of rarefied design found its way into other aspects of the car, too. The body panels, for example, were graded for thickness – according to function. Thus, those that made up the wings were more meaty. Mechanics liked that – it was something solid for them to lean against! The 401\’s four-speed gearbox was all slick engineering. Its steering-wheel, too, was exquisitely crafted. Complete with its \’banana\’ spoke, it mimicked the one found in Bristol aircraft, of the time.

The 401, then, was a gift to design students – many of them born years after the end of its run. Bristol\’s stylists and coachbuilders were a rare breed indeed. If you had used the phrase \’built-in obsolescence\’ to them, they would have been seriously confused. Not because they were stupid – but, because it simply would not have occurred to them to think in that way!