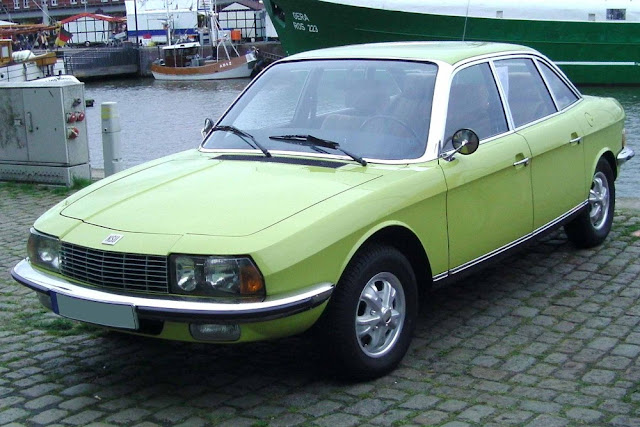 The NSU Ro80\’s styling was ahead of its time. At first glance, the masses of glass seemed straight out of science-fiction. Closer inspection revealed the gently rising line of its profile. Its \’low front, high back\’ stance would influence automotive design for years to come. For a 5-seater saloon car, the Ro80 was highly aerodynamic. Cruising at speed, then, was a breeze. So well-sorted was the NSU outwardly that it barely changed in the ten years of its run. Only tail-lights were modified, over time.

Handling-wise, the Ro80 was just as impressive. FWD and power-steering kept things nicely aligned. Long-travel strut suspension soaked up bumps. New-fangled disc brakes were fitted all round. A 3-speed semi-automatic transmission swept through gears with aplomb. Top speed was a creditable 112mph.

Nothing, though, is perfect. The Ro80 was powered by a twin-rotor Wankel engine. Unfortunately – in a rush to get cars into showrooms – said motor was under-developed. Which is when the problems started. A mere 15,000 miles was all it took. The Wankel\’s rotor-tip seals wore out. Frustrated owners cited less power – and more fuel consumption. As wear increased, the engines grew harder to start. If the car could be coaxed into life at all, it was with thick smoke billowing from the exhaust pipe. Even in less environment-sensitive times, that did not go down well. To be fair, NSU settled claims with alacrity. Indeed, it was not unknown for it to stump up double-digit engine replacements, in due course. Which only serves to show what an alluring overall package the Ro80 was. A car which caused so many headaches – and was still in demand – must have had something going for it. And – in terms of looks, at least – the NSU Ro80 most certainly did!