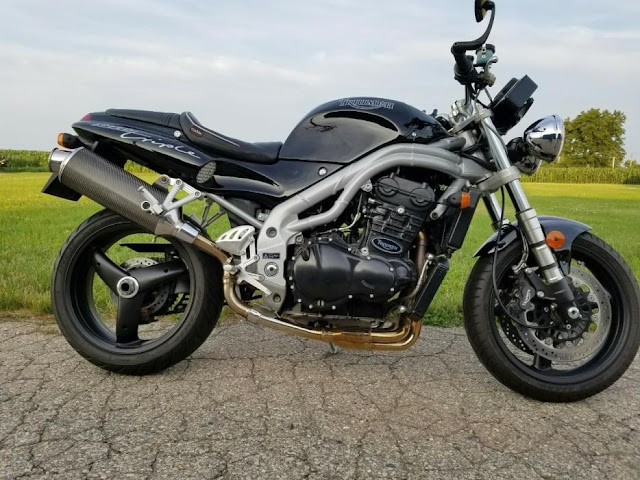 In \’83, Triumph looked dead in the water. Finally, the once-famous firm went into receivership. If it was to survive, it needed a saviour – and fast! Up to the plate strode multi-millionaire building magnate, John Bloor. A new HQ was set up in Hinckley, England. That was not a million miles away from the original Triumph factory – in Meriden, Birmingham. For the next eight years, Bloor and his colleagues planned a new range of Triumphs. One of them would be the Speed Triple. Throwing off the shackles of the wilderness years, the new bikes would be modern marvels of engineering. There would also, though, be design references to Triumph\’s glory days.

In \’91, six new Triumphs rolled into the showrooms. The parallel twins of yore were no more. Now, three- and four-cylinder engines were the norm – complete with double overhead camshafts and water-cooling. Stylistically, a sea change had occurred. The new \’British\’ bikes were as futuristically slick as their Far Eastern counterparts. Indeed, their suspension and brakes had been made in Japan. Notwithstanding, they were clutched to the \’Brit Bike\’ bosom with eager arms. Whilst there were reservations amongst dyed-in-the-wool riders, a new breed of bikers was just glad to have a British brand-name back in motorcycling\’s mix.

The names of the new arrivals harked back to the past. Trident, Trophy, Thunderbird … these were legendary labels! In \’94, came the Speed Triple. For bikers of a certain age, that evoked memories of the Sixties\’ Speed Twin. Technically, though, it was state of the art. Saying that, Triumph had long turned out a tasty \’triple\’. But, this was a three-cylinder machine with some major updates. As a result, it clocked up a top speed of 130mph. 97bhp was output from an 885cc motor. The bike\’s \’naked\’ look – devoid of a fairing – pared weight down to 460lb dry. It also lent itself to lean and aggressive styling. Road tests were positive. The Speed Triple was competent in every category. Unsightly oil stains were a thing of the past. A mighty marque was back on its feet. The Triumph Speed Triple – and its second-generation siblings – would take another tilt at the two-wheeled big time!