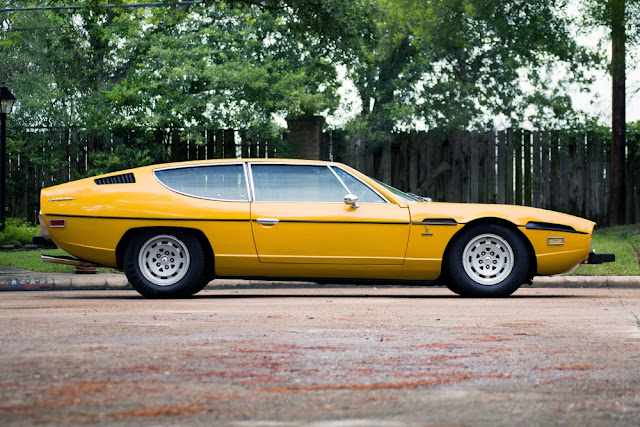 The Lamborghini Espada was designed by Bertone. Their styling standards were of the highest – both inside and out. Sitting pretty atop the tail lights, for example, was a clear glass panel. Not only was it a sweet visual flourish – it assisted with parking, too. An impressive blend, then, of form and function. The Espada\’s interior was state of the art. Its focal point was a control console, between the front seats. The console – and \’techie\’ dashboard above it – housed an aircraft-type array of dials and switches. And – Sixties supercar though it was – the 4-seater Espada was far from cramped.

The top-spec Espada was good for 155mph. It was powered by a 4-litre V12. The motor sat beneath an alloy bonnet. Pierced NACA ducts adorned the front profile. Engineering-wise, a one-off 5-speed gearbox did shifting duty.

The Espada\’s ride was pliant and smooth. That was aided by all round wishbone suspension – plus, a wide track and fat tyres. Overall, handling was excellent. Power-steering and auto transmission were options on later models. The Espada was based on the Marzal concept car. On its release – in \’68 – the Espada set a new speed benchmark for 4-seaters. So – in every automotive aspect – the Lamborghini Espada was a genuine Italian masterpiece!