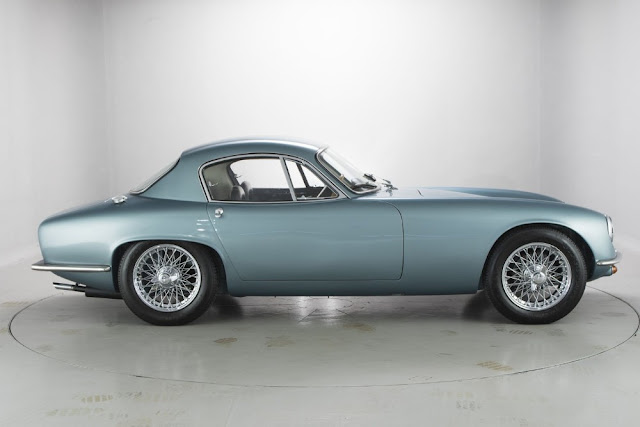 The Lotus Elite is widely regarded as one of the most stylish cars the firm made. Primarily, that was down to Peter Kirwan Taylor. Though not a leading light in the automotive design field at the time, Lotus put their faith in him – and it was rewarded. Launched in \’59 – along with the Mini and Jaguar MKII – the Elite was produced for four years. In the course of that time, it became one of the iconic British sports cars. As always – with Colin Chapman at the helm – light weight was key. With that in mind, the Elite was the first car to be built on a glass-fibre monocoque chassis. That helped it reach a top speed of 130mph. Aerodynamic lines assisted. The Elite was agile, too. Few sports cars could hold a candle to it through corners!

Power was provided by an overhead-cam Coventry Climax motor. When kitted out with a single carburettor, it delivered 71bhp. A twin-carb set-up increased that to 83bhp. A 4-speed gearbox came courtesy of BMC. The SE version would be fitted with a close-ratio, 5-speed ZF \’box. Power increased to 105bhp. The Elite was economical, though – as a result of its light weight. As impressive as the Elite\’s straight-line speed, was its handling. The car was suspended by coil-spring dampers at the front – and Chapman struts (modified MacPherson struts) at the rear. Steering was by rack-and-pinion. The full complement of high-grade disc brakes came as standard. Of more questionable quality were the windows. While pleasing on the eye, their unique profile meant they were difficult to wind down fully. Not what you wanted, on a hot summer\’s day!

Generally speaking, though, the Elite did its name justice. In styling terms, it was from the top drawer. The Elite\’s dashboard, for example, echoed its chic low profile. Nevertheless, there were faults – other than the wind-down windows issue. The car\’s monocoque – cutting edge, though it was – was prone to noisy vibration. Also, interior décor was somewhat sparse. All things considered, however, the Lotus Elite was a fine example of a top-flight British sports car!