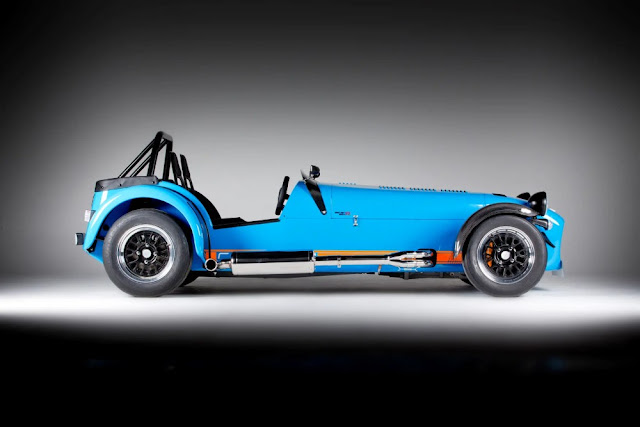 The Caterham 7 began life as the Lotus 7. Colin Chapman – boss of the latter marque – claimed to have built the prototype in a weekend, in \’57. Lotus manufactured the Seven for fifteen years. It was marketed through Caterham Cars – run by Graham Nearns. In \’73, Lotus stopped making the 7. The rights for it passed to Caterham. They set about building a plastic-bodied Series 4 Seven. Encountering issues with the new material, however, Nearns and his team went back to the aluminium-bodied Series 3 model.

Caterham were committed to the \’pure driving experience\’. Key to that was light weight – always a top priority for Chapman, too. To that end, the 7\’s nose cone and wings were glass-fibre. As said, the light aluminium body was already in situ. Beneath, sat a tubular steel chassis. The 7\’s rear axles had been sourced from Ford and Morris – though Caterham would later install a De Dion-based set-up. Caterham kept faith with Lotus\’ Twin Cam motor. The 126bhp engine was spot-on … until stocks ran out. Ford duly did the engine honours. Tuning options came in the form of GT, Sprint and Supersprint. Subsequently, more power was provided by a Cosworth BDA motor. And still more, by a Vauxhall 2.0-litre – producing 175bhp. From \’91 onwards, Caterhams came with Rover K-Series engines. There was a choice of 1.4 and 1.4 Supersport – or, 1.6 and 1.6 Supersport – units.

The top-of-the-range Seven was the JPE – Jonathan Palmer Evolution – version. Named after the F1 driver who helped develop it, the JPE encapsulated the Caterham creed. Technically a roadster, its race-spec 250bhp engine catapulted it to 150mph. It hit 60 in less than 3.5s. The JPE 7 could out-drag a Ferrari F40 – right up to 100mph. Which made it the fastest-accelerating car in the world, at the time. With no windscreen – and wings made from carbon-fibre – the JPE 7 had \’track-day\’ written all over it. So, the Caterham 7 was – as Colin Chapman had made sure – a one-stop shop for automotive exhilaration!