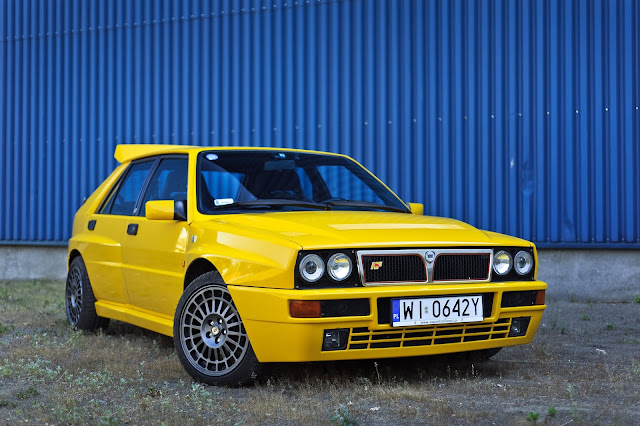 It would be difficult to overstate the impact made by the Lancia Delta HF Integrale. It swept aside all comers – on the road and in competition. In the year and a half following its \’87 launch, the Delta Integrale won 14 World Championship rallies. Miki Biasion made the most of its dominance. He garnered two world drivers\’ titles in the car.

The Integrale\’s 8-valve engine made 185bhp. In \’89, it was replaced by a 16-valve head. Power increased to 200bhp. The new model totted up 13 top-echelon rally wins. Juha Kankunnen duly took the \’91 drivers\’ title. Over time, the fruits of such success trickled down to the showrooms. The road-going Integrale\’s finely-tuned 4-wheel-drive set-up gave good handling – in all conditions. Combine that with a 2-litre turbocharged motor – and you had a perfect blend of speed and precision. As a hatchback, practicality was a given. But, there were luxuries, too. Like Recaro seats, electric front windows and a cutting edge instrument panel.

Wide wheels and fat tyres helped give the Integrale a look of purposeful muscularity. Giorgetto Giugiaro – at the Italdesign agency – did the styling honours. The bodywork was minimalist, not boxy! The original Delta – built for rally homologation reasons – was first glimpsed at \’79\’s Frankfurt Motor Show. It was followed by a Delta dynasty of progessively more sophisticated models. Lancia\’s HF acronym stood for High Fidelity. It was applied to several of the marque\’s cars over the years. Never more fittingly, though, than to the Delta Integrale!