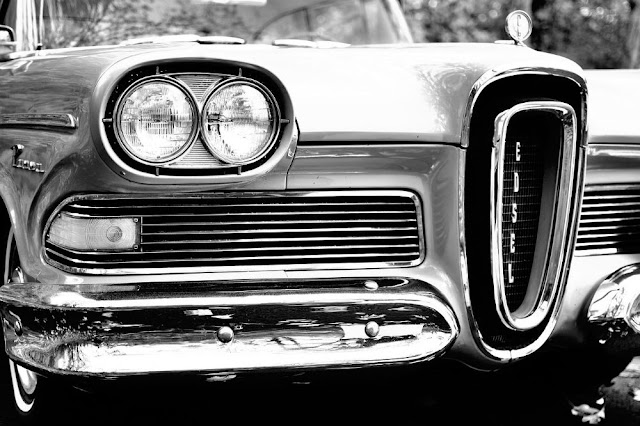 In brand-name terms, the Edsel and Mercury were peas from the same pod. In reality, the Edsel was made by Ford. Technically, though, Edsel was a marque in its own right. Certainly, it was sold as such – from \’58 to \’60. Ford forecast that – in the first year alone – it would sell 200,000 Edsels. As it turned out, a mere 62,000 shunted through the showrooms – in the whole of its two-year run. The Edsel had cost Ford $250,000,000 to develop – so, the mediocre sales figures were not good! To say the Edsel was a white elephant would be an understatement. Which was a shame, actually – because it was a car that could have had a lot going for it. Sadly, though, Ford\’s timing was out. Not that it was really the Blue Oval\’s fault. Ford\’s sales team had targeted lower-middle demographics – lodged somewhere between their up-market models and the cut-price Mercury. When the Edsel went into production, however, the automotive industry was depressed. Customers were looking to buy cheap. The Edsel was stuck in marketing no man\’s land.

As with the Mercury, there were echoes of the Ferrari Dino in the Edsel. At least, insofar as both were presented as stand-alone marques. Both, too, were named after prematurely deceased sons. Dino Ferrari – and Edsel Ford – passed before their time. The cars were fathers\’ tributes – from Enzo and Henry, respectively. It was especially sad, then, that in the case of the Edsel, sales were so poor. A front-end feature that definitely did not help was the vertically-shaped grille. American buyers simply did not take to it. Ironically, the rest of the car was quite conservatively styled. As compared with its Fifties rivals, at any rate. The Edsel \’brand\’ comprised 15 models – including saloons, convertibles and station-wagons. The one part they had in common was the floor-pan!

The Edsel\’s engine came in one of two flavours – straight-six or V8. Peak power was 350bhp. Top speed, 108mph. Manual and auto \’boxes were both 3-speed. Biggest capacity was 6,719cc. Edsels are now highly sought-after. In different economic circumstances, the Edsel may well have been a success. As it is, it has to settle for an impressively high \’one that got away\’ rating!