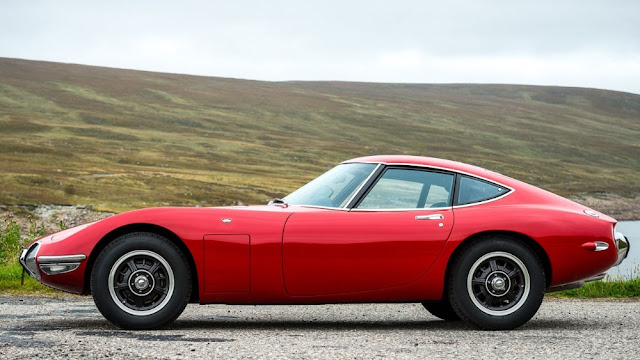 The Toyota 2000GT was designed by Graf Goertz – an industrial design firm, based in New York. The GT\’s styling was clearly influenced by the Jaguar E-Type. The lines of its bodywork were off-the-dial subtle. That was a mixed blessing. While immensely pleasing on the eye, manufacturing costs soared. Just 337 GTs would be built. As a result, the car is now highly sought-after. To be fair, the GT was intended to be a loss leader. That said, Toyota did not intend the losses to be as large as they became. For all that, when the 2000GT prototype appeared – at the \’65 Tokyo Show – Toyota\’s brand-image sky-rocketed!

The 2000GT\’s speed matched its staggering good looks. A twin-cam straight-six engine developed 150bhp. Top whack was 135mph. The motor\’s hemi-head set-up featured straight-through ports – and large valves. Suffice to say, it took deep breaths! On the inlet side were two double-throated Mikuni/Solex carbs. The engine was connected to a five-speed gearbox. Mercifully, high-grade disc brakes were fitted all round. The backbone chassis came with a full set of wishbones. Options for the final drive ratio were duly provided.

Crucially, the 2000GT failed to crack the States. A mere 63 American drivers saw fit to buy one. That was due, in large part, to its relatively high price tag. It far exceeded that of both the Porsche 911 and, indeed, E-Type Jag. In a desperate bid to placate the American market, Toyota went on to produce no less than nine more versions of the GT. To a car, they were more conservatively turned out than the original. As a bonus, they came complete with air conditioning and optional auto transmission. To no avail – as US sales continued to stagnate. Nonetheless, the Toyota 2000GT – along with the Datsun 240Z – were the strongest of signals to the sports car world that the Japanese were coming!