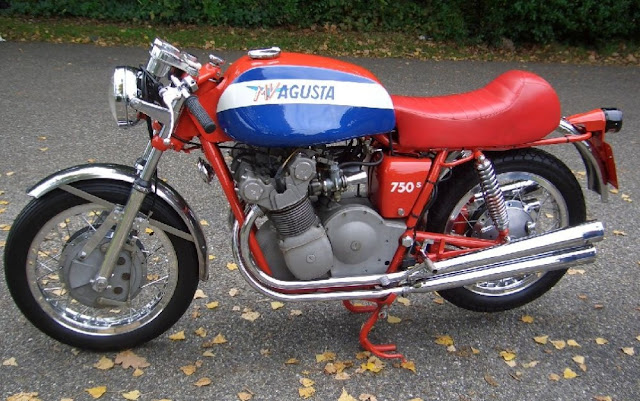 The MV Agusta 750 Sport was race-bred. A straight line could be drawn from the roadster to Meccanica Verghera\’s competition machines. They were fettled in Gallerate, near Milan, Italy. MV ruled the racing roost, at the time. The 750 Sport\’s clip-on \’bars – and humped-back seat – gave the game away. Add to them, a 4-leading-shoe Grimeca front brake – and a chrome quartet of megaphone exhausts. All were clear pointers to the Sport\’s race-track roots.

The 750\’s top speed of 120mph was good going in the Seventies. Especially, since the bike was a tad portly. It weighed in at 506lb. Its in-line 4-cylinder engine produced 69bhp – at 7,900rpm. Power was supplied via gear-driven twin overhead camshafts.

Compared to its rivals in the showrooms, the 750 Sport was expensive. Suffice to say, it did not sell well. To be fair, MV had little choice but to up the price. The complexities of the Sport\’s engine – and labour-intensive production processes – all had to be paid for. From a purely commercial standpoint, then, the Sport turned out to be another nail in MV\’s coffin. Count Domenico Agusta had founded MV, in \’45. In \’71, he suffered a fatal heart attack. With him went the soul of MV. Indeed, it was not long afterward that the marque shut up shop. The lacklustre sales of the 750 Sport had not helped. From a non-commercial point of view, however, the MV Agusta 750 Sport summed up the spirit of motorcycling like few other bikes!