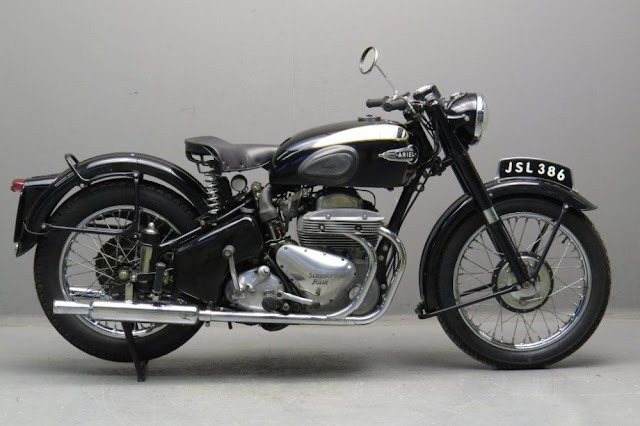 The Ariel Square Four was designed by Edward Turner. His finest hour was yet to come. He would go on to oversee Triumph – in its Sixties glory days. The first version of the Square Four, though, was released in \’28 – back when Bonnevilles and Tridents were but blurs on the \’Brit bikes\’ horizon. Square Four referenced the bike\’s 1,000cc motor. It was, in effect, two sets of parallel twins – one in front of the other. The exhaust port was shared. The downside of that layout was that – while the front brace of cylinders enjoyed lots of cooling air – the rear two did not. That could make them recalcitrant – especially on hot days!

The \’58 model Square Four was good for 105mph. Warp-factor speed for a road-bike, at the time. And – by definition – more than enough to keep \’ton-up boys\’ entertained. They were the 100mph Rockers – who had the occasional contretemps with Mods. Turner – and Triumph – would do brisk business with them, in the coming years. What made the Square Four\’s top whack stat still more impressive, was its weight. 465lb needed careful coaxing through corners.

As its name suggested, the Square Four was a solid-looking motorcycle. In the sense of impressively robust, that is. Its telescopic front – and plunger rear – suspension units complemented each other nicely. The four-header exhaust set-up sat neatly between the two. The \’Squariel\’ – as it was affectionately dubbed – soon took its place in the rapidly-growing roster of popular British bikes. All in all, then, the Ariel Square Four can hold its head high. Even in the company of the mythical machines toward which Edward Turner was moving!