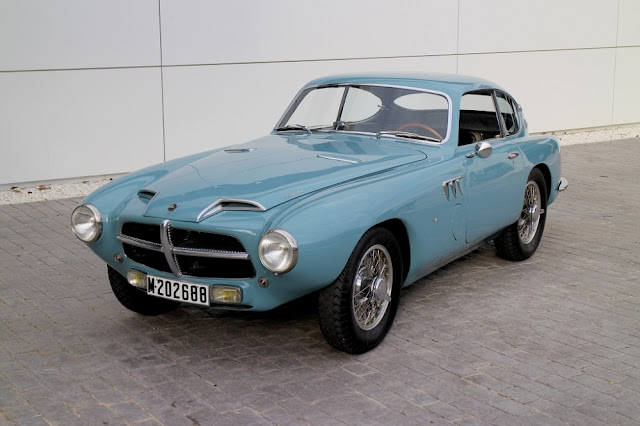 In the Fifties, the Spanish firm Pegaso made some of the most glamorous cars in the world. Among them was the Pegaso Z-102. Designed by Touring, the Z-102\’s alloy bodywork combined beauty with light weight. For whatever reason, though, the car suffered in the showrooms. Its replacement – the Z-103 – was a toned-down version of the Z-102. Its engine, for example, came with a single-overhead-camshaft. Not surprisingly, Pegaso intended that the Z-103 sell better than its predecessor. Between the pair of them, however, only around 100 units were shifted. Thankfully, Pegaso\’s bread and butter sales were in trucks and coaches. Their foray into sports car manufacturing was something of a sideline.

At the race-tracks, too, the Z-102 under-achieved. It started out with a 2.8-litre V8 engine. Baseline power was 175bhp. Bolting on a supercharger substantially upped that number – to 280bhp. Taking the 2.8-litre motor out to 3.2 upped it still further – to 360bhp. That should have been enough to be competitive. Especially, given that at lower speeds, the Z-102 handled well. Despite its light alloy body, however, in overall terms, the Z-102 was heavy. That could make it recalcitrant through higher-speed corners. Its top speed of 160mph did redress the balance somewhat – but not enough. At least it sounded great – courtesy of its gear-driven camshafts!

It felt almost as if the Z-102 had been built on a whim. Dominant though they were in the commercial vehicle world, Pegaso were less than savvy about the sports car business. The Z-102 stayed in production for seven years. The last cars left the factory in \’58. As a money-maker, it had been pretty futile. On the bright side, Pegaso had demonstrated that it could make stunning-looking automobiles – on top of its more monolithic stock-in-trade. Ultimately, insufficient attention had been paid to the Z-102\’s bottom line. The Z-103 had tried to make amends – with its more prosaic approach. But, the financial damage was done – and a line had, eventually, to be drawn. The marque of Pegaso – based in Barcelona – will probably never be spoken of in the same breath as Ferrari or Lamborghini. But, for a while, the Pegaso Z-102 showed that Spanish sports cars could be every bit as exotic as their Italian counterparts!