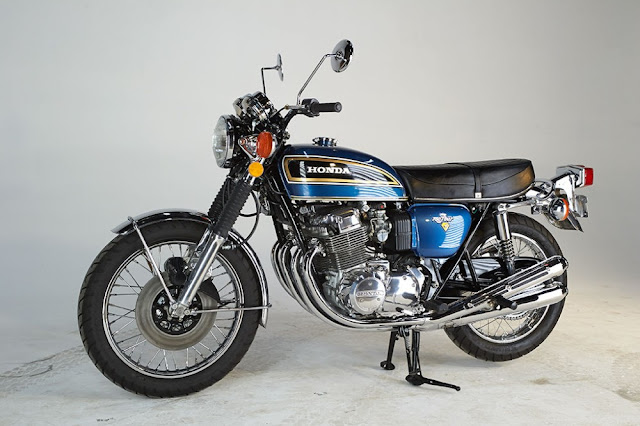 There is a case to be made for considering the Honda CB750 to be the point at which motorcycling\’s modern era began. Technically, it was released in \’69 – but its presence so suffused the Seventies that it cannot but be grouped with bikes of that decade. Kawasaki\’s Z1 is often thought of as the first Japanese \’superbike\’. Timeline-wise, though, it was the CB750 that was first out of the traps – and by a full four years, at that.

The CB750\’s four across-the-frame cylinders were a clear signal there was a new kid on biking\’s block. The shiny quartet of chrome exhausts reinforced the message. The CB750 was a muscular-looking motorcycle. But, it was stylish muscularity. The rounded tank was sleek and shapely. The multi-spoked wheels were a latticed delight. Paintwork and chrome vied for attention. At the time, the CB\’s front disc brake was technologically advanced. Highish handlebars – and a well-padded seat – were tailor-made for long journeys. So, it made sense for the 750 to be pitched as the perfect all-rounder.

Unsurprisingly, the CB was a big success in the showrooms. That was only to be expected from a bike which topped out at 125mph – and also handled well. Honda\’s rivals duly fell over themselves to try to match it. Over time, then, the CB750 furthered motorcycling\’s cause. By setting a benchmark, it forced manufacturers worldwide to follow suit. In the form of the Honda CB750, the day of the modern Jap classic had dawned!