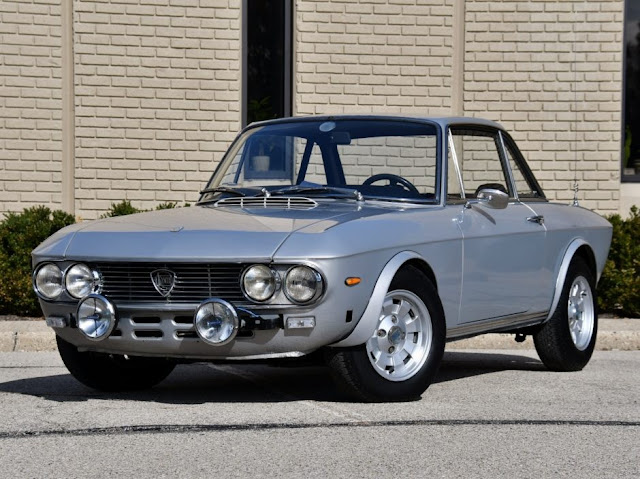 The Lancia Fulvia is a full-on automotive legend. An \’homologation special\’, only 1,180 Fulvias were built – just enough to qualify the car to compete in international rallying. As such, it went on to win two world championships. In standard form, the Fulvia was impressive. But the 1.6 HF model took it to another level. Revered as a roadster, it sported many of the features of a competition car.

The HF was powered by a narrow-angle V4 engine. It produced 115bhp – though a few factory-tuned units upped that number to 132. Even the less potent motors provided a top speed of 115mph. Fuel was supplied by twin Weber 42 carburettors. Power peaked at 6,200rpm. Transmission was by way of a 5-speed gearbox. Technically, a 4-speed \’box was used – and then a \’piggy-back\’ set of cogs was added. With all that hooked up to the front wheels, the HF handled well. Braking was via Dunlop discs. However, Lancia decided a servo was surplus to requirements.

The Fulvia\’s bodywork was designed to cleave cleanly through air – be it in a baking-hot desert or freezing forest! A clear pointer to the car\’s rally-bred roots could be found in its large 7″ headlamps. As far as wheels went, neatly flared arches topped off a set of suitably wide tyres. The rubber was fitted to deep-rimmed Campagnolo alloys. A touch of negative camber at the front – and a slightly raised rear – were hallmarks of a car for which road-holding was sacrosant. The HF\’s interior décor – or lack of it – indicated that weight loss was at a premium. At the front, high-backed bucket seats prioritised rigidity over comfort. Behind them was a padded bench … something to sit on, and not much more! Standard Fulvias – and the \’luxury\’ 1600HF – gave slightly more by way of mollycoddling. Nevertheless, it is the unadorned HF which is the most sought-after Fulvia of all. Seriously iconic, it is arguably the most illustrious Lancia of all!