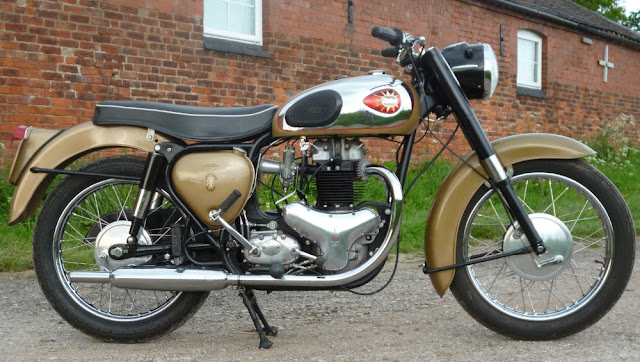 The BSA A10 Golden Flash first appeared in 1950. In terms of engine layout, it was a classic British parallel twin. BSA were based in Birmingham – at the Small Heath factory. \’71 saw the iconic marque hit the financial buffers. Mercifully, it was bailed out by the Norton Villiers Triumph conglomerate. By that point, though, BSA\’s best days were behind it. As if to clarify that, the last BSAs off the production line wore the Triumph logo!

The Golden Flash wrote the book on practical. British-built bikes had been known to deposit the occasional oil leak, back in the day. Not so, the A10! Economical and efficient, it was eminently reliable. Its 35bhp engine delivered user-friendly power. The A10\’s top speed was just a tad shy of the \’ton\’. As far as handling went, the \’54 model A10 sported a shiny new swing-arm. That was a big step up from its plunger-suspended predecessor.

On the visual side, the Golden Flash was a good-looking bike. Its BSA motor alone was a metallurgical masterpiece. Exiting it, sweetly-shaped down-pipes splayed around an intricate semi-frame. In both engineering and styling, then, the BSA A10 Golden Flash displayed the best of British design. Flash, by name, yes … but certainly not by nature!