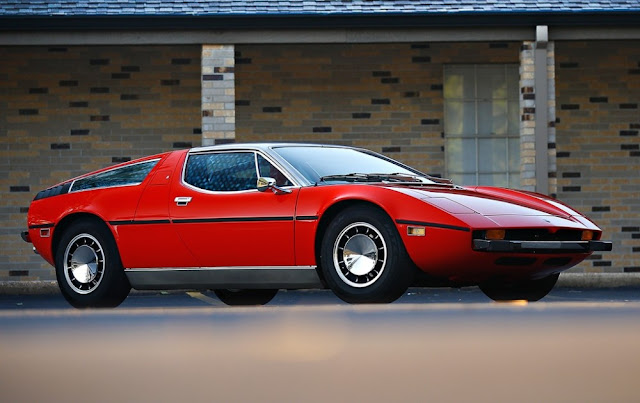 The Bora was Maserati\’s response to the Lamborghini Miura. It matched the latter\’s mid-engined layout. Ferrari\’s Berlinetta Boxer also joined the mid-engined party. But, it arrived late. The Bora beat the Boxer to it by a couple of years. The Bora was launched in \’71 – and the Boxer in \’73. The name of the game for the mid-engined cars was handling. In Maserati\’s case, the Bora was an improvement on the Ghibli\’s front-mounted motor. Now they had a car which could \’handle\’ however much horsepower was thrown at it. And the Bora produced plenty of it. Its 4.7-litre Maserati V8 was a motor of a certain age, by that point. Indeed, it now had twelve years on the clock. But – with 310bhp on tap – drivers were not much fussed about its timeline. The Bora was good for 175mph. That left many a motor half its age trailing in its wake!

The Bora was styled by Giorgetto Giugiaro. Previously employed by Ghia, he was now in his own studio. It went by the name of Italdesign. The full creative force of the firm was brought to bear on the Bora. Elegantly space-age, the car radiated Seventies chic. In other words – finesse and excess, in equal measure.

In engineering terms, too, the Bora exuded class. Even with its V8 heart beating for all it was worth, cockpit noise levels were almost eerily low. That had a lot to do with Citroën – who now controlled Maserati. They brought a host of hydraulic parts to the Bora table. Its brakes, pedals, seats and steering-column were precision-fitted by the French firm. The Bora was Maserati\’s flagship model – so, equipment levels were high. In the whole of its nine-year run, the sole modification Maserati made was a slight engine enlargement, in \’76. Throughout that time – in true Italian style – the Bora delivered a bravura blend of power and panache!