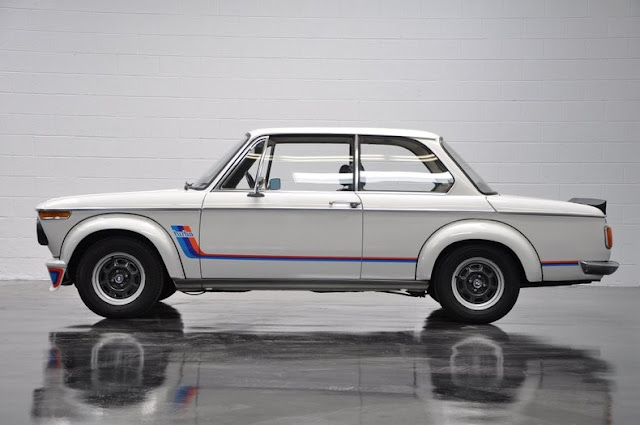 Sadly, the BMW 2002 Turbo was not a success in the showrooms. To be fair, the timing of its launch could not have been worse. In \’73, petrol-pump prices almost doubled – because of the OAPEC fuel crisis. Motorists panicked. The 17mpg 2002 Turbo never stood a chance. BMW became very anxious, very quickly! In only the second year of its production run, the 2002 Turbo was dropped. Just 1,672 cars had been built. Bad luck, basically! In different economic circumstances, the car could have been a best-seller.

The 2002 Turbo was inspired by a BMW works racer. Its raison d\’être was to breathe life back into BMW\’s entry-level saloon car slot. To that end, the Turbo\’s top speed stat of 130mph was bang on the automotive money. Peak output was 170bhp. The 2-litre 4-cylinder engine was fuel-injected. And was kitted out with a KKK turbocharger. At low to medium revs, there was little to split the Turbo and standard version 2002. That all changed, though, at 4,500rpm. When the boost kicked in, you knew about it. Thankfully, the Turbo had been prepped for the extra stress. It had beefier driveshafts and bearings than standard. Suspension spring rates were wound up. Bilstein dampers were fitted at the back. Anti-roll bars were fitted, fore and aft. Wheels were fat Mahle alloys – shod with Michelin XWX rubber. The front two were stopped by 4-pot ventilated disc brakes. Big drums brought up the rear.

The Turbo\’s gleaming paint-job – and racy decals – dazzled onlookers. Seventies chic, so to speak. The interior, too, was cut from the same glam cloth. Bucket seats were a snug fit. A bright-red instrument fascia focused attention. The turbo-boost gauge sat in the middle of the dash. A thick-rimmed 3-spoke sports steering-wheel topped it all off. Boy racer style, all the way. BMW\’s 2002 Turbo was the right car – at the wrong time. Ultimately, it could not get enough of what it needed most. The crippling cost of petrol, at the time, meant it simply could not survive!