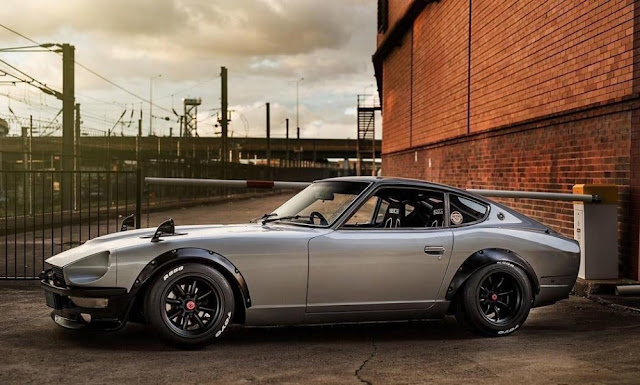 The Datsun 240Z was released in \’69. It would go on to become the best-selling sports car of the Seventies. It was proof positive that Japan was now in the top echelon, when it came to car – as well as bike – design. That was thanks, in no small part, to Yoshihico Matsuo – head of Nissan\’s Sports Car Styling Studio.

The 240Z was not just about looks, though. Its mean and lean straight six motor saw to that. It transported the Z to a top speed of more than 125mph. 151bhp was available. Capacity was 2,393cc. There was a 5-speed manual gearbox. As well as all-independent suspension … struts up front, strut-and-wishbone at the rear. Rack-and-pinion steering was positive and precise. Last, but not least, was the Z\’s ear-splitting exhaust note!

Though its interior trim was not plush, as such, the Z came comfortably enough equipped. Its build quality let the side down a tad, however. Let us just say – rust took too many 240Zs before their time! 156,076 cars were built – up until \’78. A lowish price tag – relative to its European rivals – helped the car\’s cause in the showrooms. All in all, the Datsun 240Z was a pukka 2-seater, to rank with the best of them. Japan was permanently plotted on the world\’s sports car map!