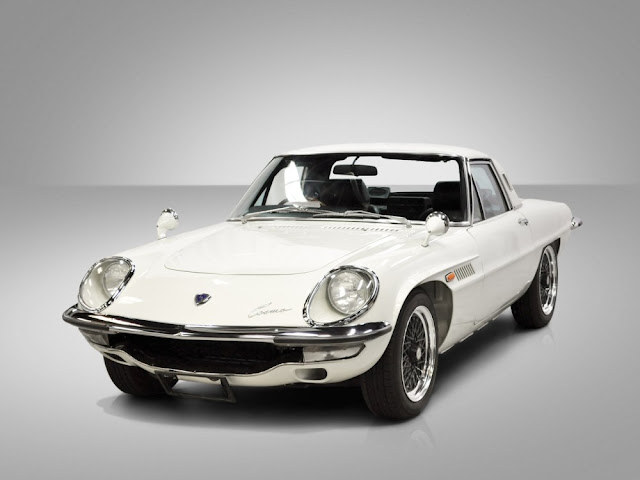 The Mazda Cosmo was the first rotary-engined production car. Dr Felix Wankel\’s motor was sewing-machine smooth. It was flexible, too. Compromising a tad on top-end power, Mazda put the peripheral inlet ports in the engine casing. That gave more low-down torque. It also provided seamless idling and improved low-speed fuel economy. Not that the upper end of the rev range was ignored! The Cosmo\’s 116mph top speed testified to that. The twin-rotary motor produced 110bhp. Capacity was 2,000cc. The Cosmo came with an efficient power-to-weight ratio. Its gearbox was 4-speed manual – connected to a DeDion rear axle. Revs maxed out at 7,000rpm. The B model Cosmo, released in \’68, delivered 125mph – from 128bhp.

Sports car that it was, the Cosmo handled well. Its DeDion rear suspension set-up was complemented by front wishbones. Steering was agile. The ride was firm. Brakes were out of the top drawer – discs fore, drums aft. The B grew a longer wheelbase. It also came with a closer-ratio 5-speed transmission. Just 1,176 Cosmos were built – between \’66 and \’72. That implied that – for Mazda – the Cosmo was more of a work-in-progress, than a short-term grab at the big yen. That would come later – in the more lucrative form of saloon cars.

Styling-wise, the Cosmo sought to emulate European sports cars. Its front headlights, for instance, were straight out of the E-Type Jag school of design. To be fair, the rear light set-up was more radical. The bumper split its upper and lower sections. In motor manufacture terms, Mazda continued to take the rotary route. The high-grossing RX7 rewarded their faith. The Mazda Cosmo, then, was the rotary-powered template for one of the top Japanese sports cars!