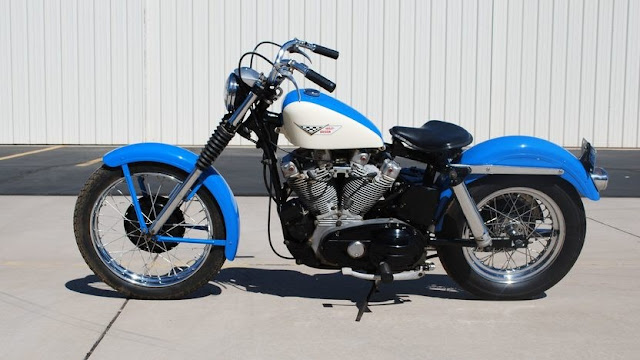 The Harley-Davidson Sportster is a motorcycle institution. It first hit American highways in \’57. There has been many a model since – and the Sportster still shows no sign of stopping. Throughout its venerable run, it has given many a new rider a first taste of the biker brotherhood. The Sportster has long held pride of place as the entry-level Harley. Pared down to bare biking bones, it has always cut straight to the chase. By \’62, the Sportster was dishing up 55bhp – at 5,000rpm. That was thanks to its iconic V-twin engine layout. The motor\’s stroke, at that point, was a tall 96.8mm. That translated into hefty dollops of acceleration-laden torque. Top speed for the Sportster, in the early Sixties, was 110mph.

The XLCH Sportster weighed in at 485lb. That was light enough for a skilled rider to cruise through corners with relative ease. While hardly a sports bike, by modern standards – back in the day, it was a lithe and agile ride. Before the Sportster, British-built bikes had been the only way to go – at any sort of speed, anyway. So, the Sportster was a welcome addition to the roster of quick and capable roadsters on offer.

The Sportster has long been a mainstay of tidy, uncluttered design. As with any bike, the focal point was its small – but perfectly-formed – fuel-tank. Alongside it were a diminutive headlamp and relatively low-set \’bars. At least, as compared with many a custom-style machine. A single seat – and slender fenders – were in keeping with the Sportster\’s minimalist approach. In many ways, then, the Harley-Davidson Sportster has been the bedrock of this most prestigious of two-wheeled marques. Long may it continue to be so!