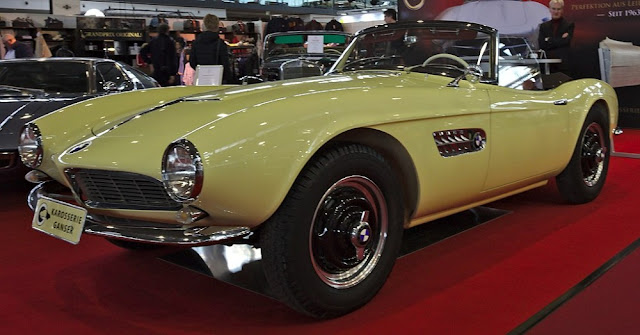 The BMW 507 was styled by Albrecht von Goertz. He was a German aristocrat – who owned an American industrial design agency. Goertz took the big box-section chassis of the BMW saloon car – and shortened it. The result was a more than tidy 2-seater. The 507 was an unabashed attempt to crack the American glamour market. Post-war, BMW had watched their brand-image slide into mediocrity. It was high time the great German manufacturer raised its profile again. The 507 was supposed to do just that. It was not to be. Only 253 BMW 507s were sold. To all intents and purposes, the 507 was automotive haute couture. But – as in the fashion industry – it costs gargantuan amounts to produce. The Second World War was not long gone. For most motorists, the 507 simply was not affordable.

The 507 got its well-heeled occupants from A to B with a minimum of fuss. Not that it could not push on, if required. Should you have been a tad late for the opera, for instance, a firm brogue on the go pedal would definitely get you there for curtain up. The 3-litre V8 engine gave 160bhp. That translated to 140mph, flat out. 0-60 came up in 9s. The sounds emitted from the 507\’s twin rear pipes were music to the ears. Even at speed, its ride was unflustered. Front and rear torsion-bar suspension saw to that.

The 507\’s detailing was exquisite. And not just the beautiful BMW badge. The cross-hatched heat-vents were a notable touch. They were matched by the car\’s kidney-shaped grille – a trademark BMW feature. The 507\’s front-end was almost shark-like – courtesy of its stylishly protruding nose. The long, flowing bonnet-line was complemented by a cute stub-tail. The 507 stayed in production for just four years. Consummately-crafted, it mated motoring and fine art. Ultimately, the 507 cost BMW more than it recouped. But then, what price do you put on perfection?