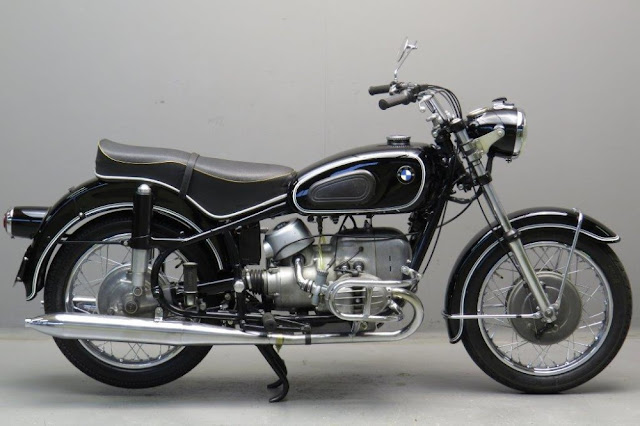 The \’60\’ in R60/2 referenced the bike\’s 600cc engine capacity. BMW released it in 1960. It proved to be a popular addition to BMW\’s roster of rugged, reliable machines. The R60/2 was no athlete. Well, in fact, it was – but its athleticism was of the long-distance kind. Heavy steering – and soft suspension – rendered the R60/2 far from flickable. Point it at some far-flung destination, however – and you\’d be there soon enough. Stability-wise, having a side-car attached helped. The R60/2 adapted well to three wheels. That was good – because, for many families, at the time, the motorcycle was often the sole form of transport.

The R60/2\’s stamina was provided by a \’boxer\’ flat-twin. Though not, frankly, the most finely-tuned of engines, it was, nonetheless, strong and relatively smooth. That was seen to by its simple, reciprocal layout – the two pistons \’punching\’ steadily in and out. The power that produced was well-documented. In the \’30s, Ernst Henne had set speed records on streamlined, supercharged BMWs. Schorsch Meier was the first foreign rider to win an Isle of Man TT. That was the \’39 Senior – aboard a half-litre boxer BMW. And – in \’56 – Walter Zeller was runner-up in the 500cc world championship. BMW\’s forte, though, was side-car racing. Between \’54 and \’74, they notched up 19 out of 21 world championships, in the category.

Top whack for the roadster R60/2 was 87mph. That, from a mere 26bhp. Weight, though, had been pared down to just 430lb. So, the shaft drive set-up was still able to deliver a reasonable return of speed. Leading-link Earles forks oozed comfort. And, the R60/2 was pleasantly enough styled – in a \’solid\’ sort of a way. If you craved a machine, then, to set your pulse racing, the R60/2 probably would not have been it. If, though, travelling the world without missing a beat was what was needed … well, BMW had built the bike for you!