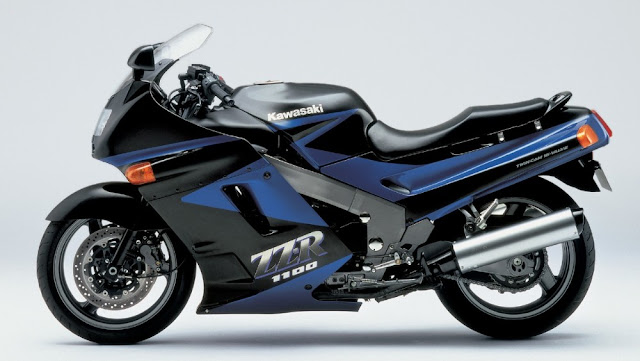 The Kawasaki ZZ-R1100 was one serious superbike. 176mph flat-out testified to that. Its 1,052cc, 16-valve, in-line four engine produced 145bhp. It needed to – the ZZ-R weighed in at a portly 603lb, wet. From 1990 to \’95, the ZZ-R was the world\’s fastest production motorcycle – succeeding Kawasaki\’s ZX-10, in that regard. It took the Super Blackbird to restore Honda to the top of the speed heap.

The high-grade performance stats were due, in no small part, to \’ram-air\’ technology. The faster the ZZ-R travelled, the more air was forced through its ducted fairing, to the motor. More air meant more combustion – which, in turn, meant more power. If it was not an exponential increase – it sure as heck felt like it!

For all of its brain-warp acceleration, the ZZ-R was a forgiving beast, at heart. Sold as a sports-tourer, its chassis came supremely well-equipped. Both frame and suspension were solid, yet flexible. With the right settings dialled in, the ZZ-R was as safe as your riding skills. That a bike as explosive as the ZZ-R1100 could be considered an all-rounder said it all about Kawasaki engineering!