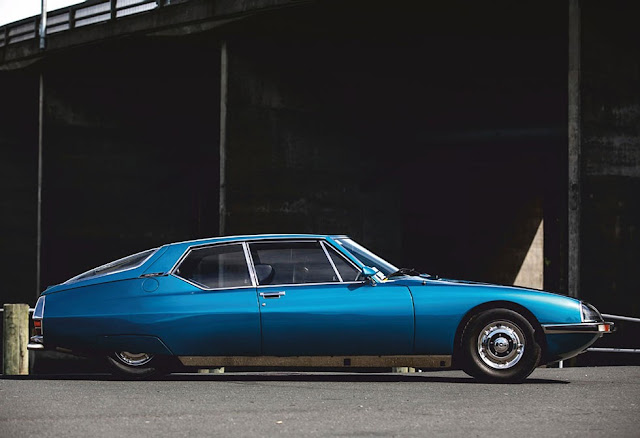 The SM was almost as much Maserati as it was Citroën. The late Sixties saw the French manufacturer also at the helm of the iconic Italian carmaker. Indeed, the SM was the first showpiece from the new automotive \’double act\’. And, it was a best of both worlds scenario. Citroën\’s slick, slippery shape was mated with Maserati\’s expert engine know-how. The nose – with its panoply of lights – was deftly faired in behind a slender strip of glass. At the back, a sweetly-styled hatchback sloped gently down to the rear light cluster. Between the two were some of the most eye-catching lines ever to grace a Grand Tourer. Indeed – for budding designers – the SM\’s window geometry alone warrented close scrutiny!

Power was provided by a scaled-down version of Maserati\’s four-cam V8. The resulting V6 had a capacity of 2.7 litres. There was a good reason for such precision. French tax rules hammered engines over 2.8 litres. The \’micro\’ Maser motor delivered 170bhp. That still made it good for 140mph. In keeping with Citroën tradition, the SM was FWD. To enable that, the gearbox/transaxle sat fore of the front-mounted motor. Citroën\’s self-levelling hydro-pneumatic suspension saw power to road, in safe and seamless style. Ultimately, that was the SM\’s trump card. The union of French and Italian technical excellence meant the ride stayed serenely smooth – whatever the speed. And – when it came to the latter – Maserati had made sure there was plenty of it!

Classic car though it now is, in its day, the SM felt futuristic. The switches and dials on its expansive dash were impeccably avant-garde. And, the single-spoke steering-wheel would have worked in a lunar landing module! Exterior lines, too, were ahead of the game. The SM\’s launch-date, though, proved to be its undoing. Released in 1970, it was just in time for the \’73 oil crisis! With a lowish 18mpg fuel economy, the SM was dead in the water from that point on. Which was doubly sad – because, until then, SM business had been brisk. French drivers had gorged on the first luxury GT car since the Facel Vega Facel II. Citroën did what they could to stem the tide, sales-wise. Subsequently, an SM model was offered with a 3-litre injected engine. Plus, optional auto transmission. All that incurred an upwardly-revised price tag, of course. If Citroën hoped those with deep pockets would save the day, it was not to be. When the plug was finally pulled – in \’75 – just shy of 13,000 SMs had been sold. Not great – for one of the world\’s leading manufacturers. Shame, really – since, for a few short years, the Citroën SM showcased European collaboration at its best. An exquisite mix of French/Italian style and technology!