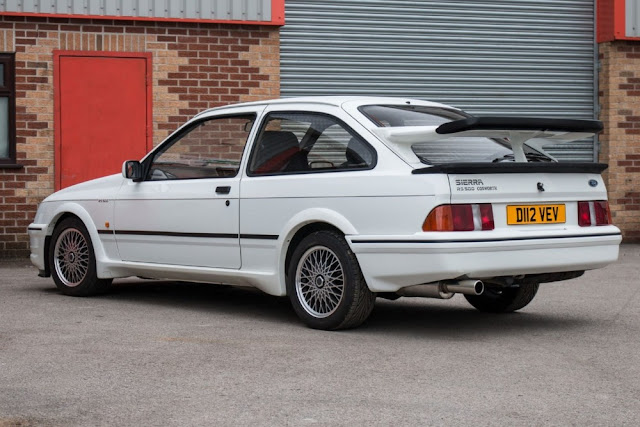 The Ford Sierra Cosworth was a performance car for the people. For a start, it was a snip at just £16,000. For that, you got supercar speed and stability – plus, practicality. Ford passed their Sierra shell to tuners Cosworth – based in Northampton, England. And the \’Cossie\’ was born! Cosworth installed a two-litre twin overhead-camshaft turbo engine. The production car was an \’homologation special\’ – a certain number needing to be built to allow it to compete in races and rallies. So, such cars are limited-edition by their very nature. Ford\’s Special Vehicle Engineering department was asked to come up with a competitive Group A car. There were several key components on the SVE\’s spec-list. Toward the top were a close-ratio 5-speed gearbox, a limited-slip diff and power steering. As well as ABS, anti-roll bars and firmed-up suspension. 4-piston disc brakes were attached to wide alloy wheels.

The Cosworth\’s body was modified Ford Sierra. Updates included widened wheel arches – and a \’whale-tail\’ rear spoiler. While the latter increased downforce, it compromised aerodynamics. And was not ideal in cross-winds! Still, if you bought a Cossie to make a statement – and you probably did – the rear aerofoil was spot-on. \’Spirited\’ drivers praised planted handling – along with fearsome acceleration. Top speed was 149mph.

Of course, the Cossie was a magnet for thieves and joy-riders. Insurance costs sky-rocketed. In time, the tearaways moved on to pastures new. Once rid of its hooligan \’rep\’, the Cosworth transitioned into performance car respectability. The Sierra Sapphire and 1990\’s 4×4 version duly followed. A further 16bhp would be coaxed out of the Cossie\’s 16-valve cylinder-head. In racing, rallying and roadster modes, then, the Ford Sierra Cosworth delivered the goods. Well, not literally!