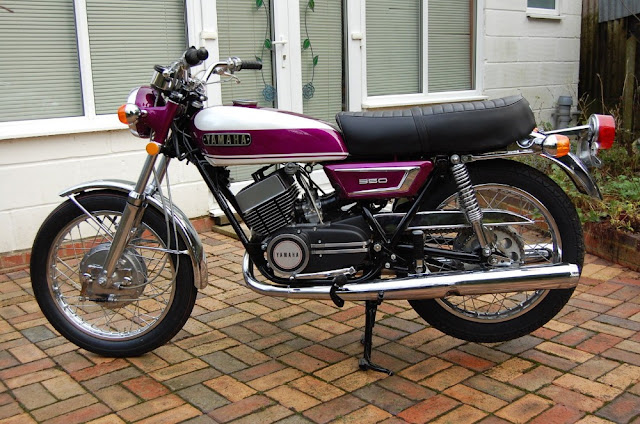 The YR5 is a small, but perfectly-formed \’Jap classic\’. Torakusu Yamaha founded Nippon Gakki in 1897. The firm went on to become one of the world\’s biggest makers of musical instruments. In \’55, it branched out into motorbikes. Some might say they made sweeter music than Yamaha\’s previous products! The company logo – a tuning fork – has appeared on the tanks of millions of bikes since. Certainly sweet music to a salesperson\’s ears! One of the best-sellers was the YR5.

The \’big four\’ Japanese bike manufacturers introduced precision-engineering hitherto unseen in the industry. Indeed, Torakusu Yamaha had trained to be a clock-maker, prior to starting up Nippon Gakki. The first Yamahas were built with machinery previously used to forge aircraft propellers. Now, that is the kind of component that needs to be got right!

The YR5 was a supreme example of early Japanese bike building. It reached a top speed of 95mph – from only 350cc. Engine layout was reed-valve 2-stroke. In tandem with that, the YR5 weighed just 330lb wet. Acceleration was fierce – right up to 7,000rpm. Traditionally, there has been a trade-off between \’stroker\’ speed and reliability. The former tended to come at the expense of the latter. Yamaha\’s 2-strokes, though, gained a reputation for robustness – relatively so, at any rate. The YR5\’s handling and braking were equally solid. Design-wise, neat and tidy styling set off pristine paintwork. As you would expect, then – with a competitive price-tag attached – the Yamaha YR5 sold by the shedload!