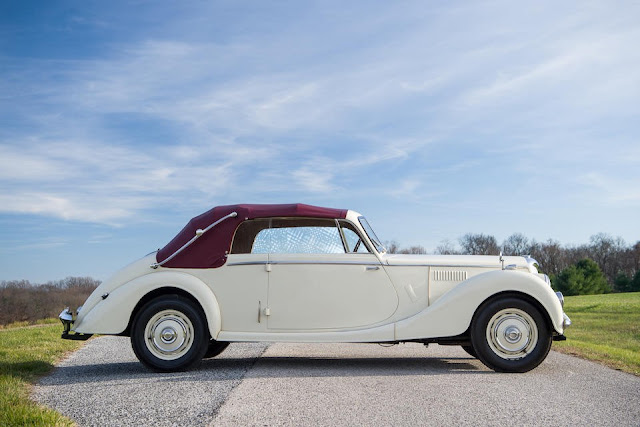 By the time the RM series was launched – in \’45 – Riley\’s glory days seemed gone. Dating back to 1898, the firm had produced a steady stream of successful saloon and sports cars, throughout the \’20s and most of the \’30s. At race circuits, too, Rileys met with much success. Sales had been consistently impressive. By the late Thirties, though, financial fissures were forming. As a result, \’38 saw Nuffield take over the Riley reins. It worked. Before long, there was a resurgence of interest from investors. And, the post-war launch of the RM series saw Riley right back on track.

The RMA and RMB models were stylish saloons. Timber frames were wrapped in swooping steel bodywork. Topping it all off was a woven removable roof. Both A and B were fitted with Riley\’s high-cam inline-four engine. The A was good for 75mph. The B took that out to 95mph. Riley\’s motor had the longest stroke of any post-war British production car. As you would expect, then, torque came by the barrelful. Again, both A and B featured torsion-bar independent front suspension. So, good handling was also a given.

The most glamorous member of the RM club was the C. Since it was a tilt at the American market, it came with column gear-change. Well, it was only polite! Other notable updates were a fold-flat screen and lower bonnet-line. The RMC was pure roadster – to wit, an open 3-seater, with cutaway doors. In due course, the RMD appeared – as a 4-seater drop-head. It reverted to a more traditional body than the C. Completing the series were the RME and RMF. Improvements included hydraulic brakes, a hypoid back-axle and larger rear windows. In \’54, Riley revisited the E version. It received the honour of the final RM makeover. Its running boards were removed – and headlight pods streamlined. A set of rear wheel spats was grafted on. By this point, though, Riley were clutching at straws, commercially. Revered as it had been, the brand-name was now in decline. There would be one final throw of the Riley dice – in the form of the Pathfinder. But – according to critics – its four-cylinder motor was about all it had going for it. Back in the day, however, Riley combined British panache with sporting prowess. The RM series had made that abundantly clear!