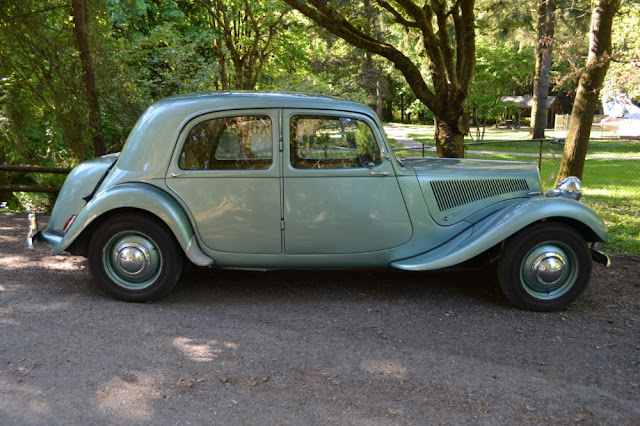 Not many cars can claim to have changed the face of motoring. One that can is the Citroën Light 15. Its unique selling point was front wheel drive – or traction-avant, in its native tongue. And its innovative engineering did not stop there. The Light 15\’s 3-speed gearbox sat in its nose – fore of the engine. Power passed to the torsion-bar-suspended front wheels via CV-jointed shafts. Said transmission system was decidedly avant-garde in \’34 – when the Light 15 was released. In road-holding terms, it was a revelation. The only downside to FWD was that it made the steering a tad heavy. A subscription to the local gym, though, soon sorted that out!

There was to be a tragic twist, though, to the Light 15 tale. Its cutting edge features meant Citroën\’s development costs spiralled. The resulting stress contributed to the early death of André Citroën – the firm\’s founder. Sadly, he died without a sou to his name. At least his company was bailed out – by tyre maestro Michelin. As a result, the Light 15 stayed in production for years to come. In time, it became a best-seller for Citroën. Not that that benefitted poor André much. It was also highly influential. For example, the Light 15\’s FWD – and, thus, improved handling – made it a big hit with the French police. Ironically, it was just as popular with less law-abiding citizens – and for precisely the same reasons. Cops \’n\’ Robbers had never been so much fun! Thanks to its 1.9-litre overhead-valve motor, the Light 15 had a top speed of 75mph. Hair-raising chases duly ensued. But – thanks to the Light 15\’s independent torsion-bar springing – they were bounce-free. Well, almost!

The Light 15, then, was a benchmark car. It was not until \’55, however – and the advent of the DS – that Citroën let it slip into well-earned retirement. After all, the Light 15 had done much to pave the way for its successor. In particular, it had pioneered the hydro-pneumatic self-levelling suspension set-up for which the DS would be celebrated. Styling-wise, the Light 15 did not change much over the years. Fine examples can still be seen on French roads today – a clear indication of its high build quality. The French have a saying, which translates to \’The more things change, the more they stay the same\’. The Light 15 was a case in point. The rate of change has sky-rocketed recently. So, it is easy to forget that machines like the Citroën Light 15 have long been pushing the technological envelope!