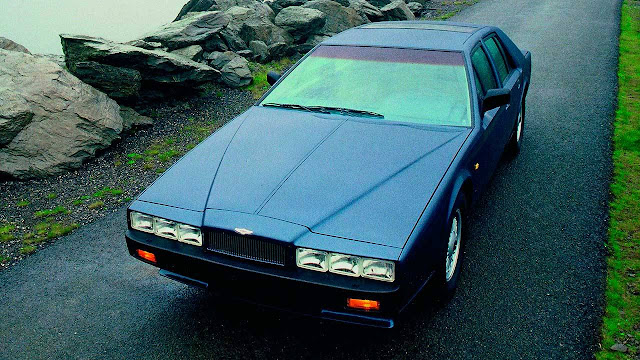 There was little doubt which car was the star of the \’76 Earls Court Show. The Aston Martin Lagonda fired up a furore of excitement around its stand. 170 orders were placed, there and then. Aston – still reeling from recent travails – were on cloud nine. Then the problems set in! The Lagonda sported futuristic looks – designed by William Towns. His cutting edge styling included not just the exterior lines, but the cabin area, too. A digital dash – and touch-sensitive controls – seemed straight out of Star Trek. But, this was \’70s Britain – not \’90s Silicon Valley. Technical gremlins surfaced from the get-go. As a result, the Lagonda\’s launch was delayed three years. By the time it was finally released, its price tag had risen to £32,000. Aston thanked their lucky stars that it was still in demand!

In terms of traditional engineering, the Lagonda was fine. Its chassis was an updated version of a tried and tested set-up. Suspension, too, had been seen before. Following a few tweaks to sort an increase in weight, ride and handling were spot-on. Press reviews were upbeat. The Lagonda\’s engine, especially, was praised. Its 5.3-litre V8 – with quad-cam layout – made 340bhp. Top speed was 140mph. That was impressive – for a saloon car weighing nearly two tons. Transmission was 3-speed auto.

Ultimately, the Lagonda was all about leisure. Avant-garde though it was, it also harked back to a more luxurious past. On its launch, then – in \’79 – Lord and Lady Tavistock were first in line. Air conditioning – and electric seats – came as standard. Coachbuilders Tickford turned out three stretched Lagondas – complete with colour TVs. But, for all of its state of the art buzz – and genteel pretensions – the Lagonda did not sell well. By the end of its run – in 1990 – a scant 645 cars had been built. It had signally failed to back up the hype – commercially-speaking, anyway. The high-tech teething troubles had not helped. In that regard, however, it paved the way for cars to come. At the time, though, Aston Martin\’s Lagonda bit off more of the future than it could comfortably chew!