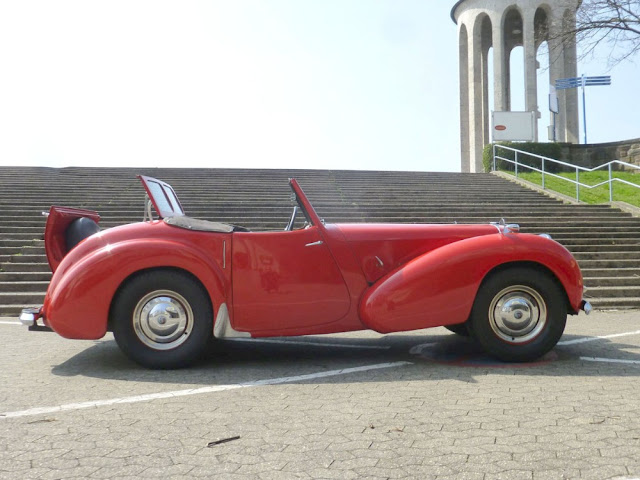 The Triumph Roadster was a direct challenge to the Jaguar SS100. In \’44, Sir John Black – owner of Standard – took over Triumph. He was keen to throw down the gauntlet to Jaguar. Over the years, Black had sold many an engine, gearbox and chassis to the automotive giant. Indeed, having Standard as a supplier played a part in Jaguar\’s success. There was more than a hint of table-turning, then, when Black suggested to William Lyons that he take over Jaguar, too. Lyons was having none of it. Black retreated to lick his wounds – and scour his Standard components catalogue. Already, a vision of a new Triumph was forming in his mind.

Standard knew their stuff all right. In the Second World War, they had engineered aircraft. So, it made sense for Black to use the Standard 14 engine – and its gearbox – to power his Triumph Roadster. The motor had already been modded to take an overhead-valve configuration – by Harry Weslake, no less. Measuring 1,776cc, it had also served time on the 1.5-litre Jaguar SS. More Standard parts were sourced for the suspension. Up front, the transverse-leaf independent set-up of the Flying Standard Series was co-opted. At the rear, a Standard Fourteen back-axle found another home. Not everything on the new car harked back to the past, though. There was a brand-new ladder-frame chassis, for example – made from 3½″ round-section tubing. Roadster bodywork was aluminium. It was hung on a timber frame – since there was a shortage of steel, in the wake of the War.

The Jaguar SS100 served as design template for the new Triumph. Pre-war, it was a byword for style and sophistication. Frank Callaby drew a Triumph variant on the Jaguar theme. He was inspired by the SS100\’s huge headlamps – and the languorous curves of its wings. For his part, John Black was adamant that a dickey-seat be fitted. The 3-plus-2 cabin was unique amongst post-war cabriolets. In \’48, the Roadster had a bigger engine installed. Power increased by all of 3bhp. Plus, the new model was 36kg lighter. 0-60mph was reduced to 27.9s. The re-vamped motor was a Vanguard \’wet-liner\’. It was linked to a 3-speed gearbox. The two Roadsters – 1800 and 2000 – had a combined sales tally of just 4,501. So, Sir John Black\’s dream of supplanting Jaguar had not materialised. The Triumph Roadster will never be spoken of in the same hushed tones as the Jaguar SS100. Even so, it was a dynamic, attractive addition to the British sports car roster.