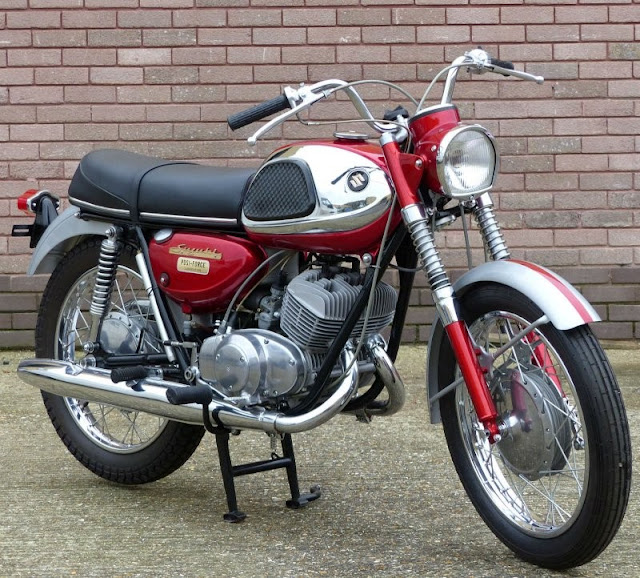 For Suzuki, bikes like the T20 Super Six had been a long time in the making. Originally, silk was the route to success for the Japanese company. Specifically, silk looms. In 1909, Michio Suzuki founded a firm to produce said items. It was not until \’54 that Suzuki became … well, Suzuki! For, it was in that year that it built its first bike – the 90cc Colleda. It was taken – hot off the production line – to the Mount Fuji hill-climb, where it saw off all-comers. The motorcycle world would never be the same again.

Fast forward to \’66. It was a great year for two reasons. England won the World Cup – and Suzuki served up the Super Six. Suzuki went global with the the T20. It was named Super Six after its 6-speed gearbox. But, innovative engineering did not stop there. Its 2-stroke engine featured the Posi-Force lubrication system. And – holding the engine securely in situ – was Suzuki\’s first twin-cradle frame. That – combined with a dry weight of just 304lb – meant the T20 handled with aplomb. The parallel-twin motor made 29bhp. Top speed was 95mph. Suffice to say, the Super Six sold by the shedload!

The T20 was a good-looking bike. Lustrous paintwork – plus gleaming chrome – made for a notably fetching finish. Festooned around it were neat design touches. The front-end, especially, was drafted with panache. What with an intricately-spoked wheel, finely-crafted forks and elegantly raised \’bars, the T20 did not stint on detail. So, a landmark machine, from one of the all-time greats. Suzuki\’s T20 Super Six mixed speed and style – to more than impressive effect!