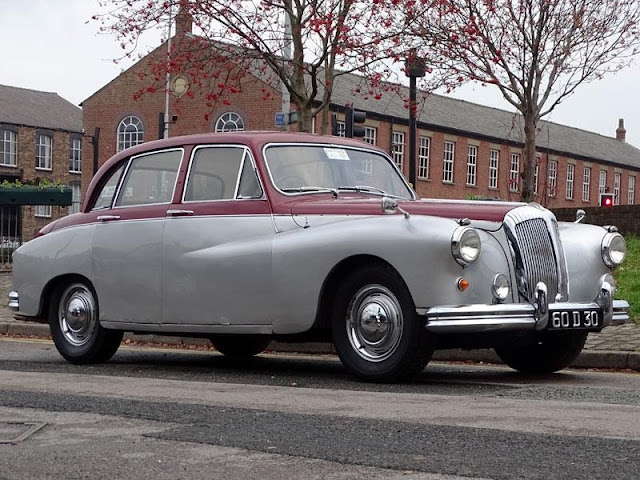 At first glance, the Daimler Majestic Major may not appear to be much of a performance car. But – at least by the standards of its day – it was. Notwithstanding the Major\’s large dimensions – and a separate chassis – it could outpace the best of them. And, it had manoeuvrability to match! Top whack was 122mph. Enough for it to glide with ease past many a sports car. Come the corners – and things were no different. Power steering saw to that. Key to the speed was a 4.7-litre hemi-head V8. 0-60 turned up in less than 10s – 9.7, to be precise. Impressive acceleration for a car of its bulk. Transmission was via a 3-speed auto \’box.

Few saloons cruised Britain\’s highways and byways like the Major. Of course – being a Daimler – elegance came as standard. The cabin was all one would expect from a car of its class. Leather pews – and a wooden dash – made it home from stately home. Seating arrangements were suitably spacious. The boot – about the size of your average black hole – could accomodate every golf club known to man. A limousine version – the DR45 – was tailor-made for the carriage trade. Funeral parlours doted on it. And yet – for all of its high-end charm – the Majestic Major had a trace of the common touch. It was drawn by the same designer as the FX4 taxi-cab!

1,180 saloon version Majors were built. Plus, 864 limousines. In the course of the car\’s run, Daimler was taken over by Jaguar. indeed, a Daimler engine was ear-marked for a new MkX – Jaguar\’s flagship model, at the time. Sadly, a prototype of the V8 motor was as far as it got. It blew all the Jaguar engines into the weeds. That did not endear it to Jaguar\’s top brass. After all, shareholders might legitimately have asked what they had been doing for the last few years! So, the Daimler Majestic Major combined edge-of-your-seat speed with rarefied styling. In short, it was a souped-up saloon car for the wannabe aristocrat in all of us. Well, all right, most of us!