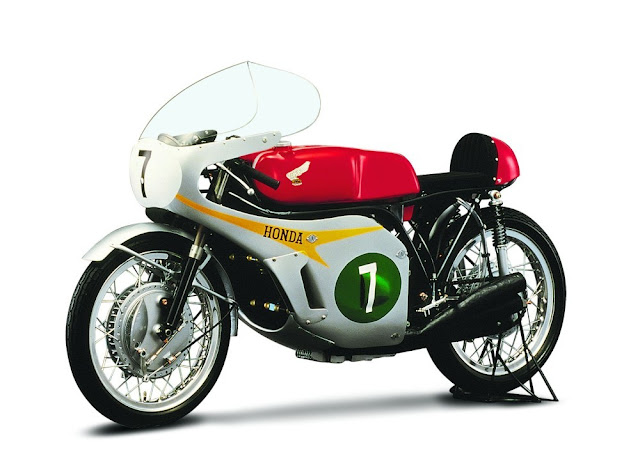 6-cylinder bikes – like the Honda RC166 – are a rarity on the road. Even more so at the racetrack. Motorcycles are suckers for straight lines. To the motorbike mindset, corners are burdensome things – involving the manipulation of mass. And, the more mass there is, the less keen on cornering the bike becomes. More cylinders mean more mass – which means more meandering through the twisty bits. Well, according to the standard laws of physics, that is. The Honda RC166, however, obviously did not do things by the book. Having half a dozen cylinders strapped across its frame did not seem to bother it one jot. Numerous race wins – and world championships – were testament to that.

The writing was on the wall back in \’59. That was the year in which the Japanese first took part in the Isle of Man TT road races. As it turned out, that season brought Honda only modest success. Subsequent visits to the island, though, saw them decimate all-comers. The Sixties were a heyday for Honda. In \’66, Mike Hailwood won 10 out of 12 GPs – on the 250 RC166. On top of that, he took the 350 title – on a bored-out 297cc bike. The following year – in \’67 – he did the same again!

As befitted a bike with a \’six-pack\’, the RC166 was enviably slim. Its fuel-tank was vintage-style slender. It had clearly been designed with \’flickability\’ in mind. A dry weight of just 264lb was perfectly aligned with that. As well as its petite proportions, the RC166 brought raw power to the table. 24 small valves – 4 per cylinder, by my maths – spun up 18,000rpm. 60bhp was the much-cherished result. Certainly – combined with its skinny physique – it was more than enough to get the job done. Throw a rider like Mike Hailwood into the mix, and it was a cinch. To the racing cognoscenti, the bike\’s exhaust note was a six-cylinder symphony, no less. For many fans, old school shots of \’Mike the Bike\’ Hailwood on an RC166 are as good as it gets. Hurrah for Honda and its high-speed six-pot … bike racing had moved up a gear!